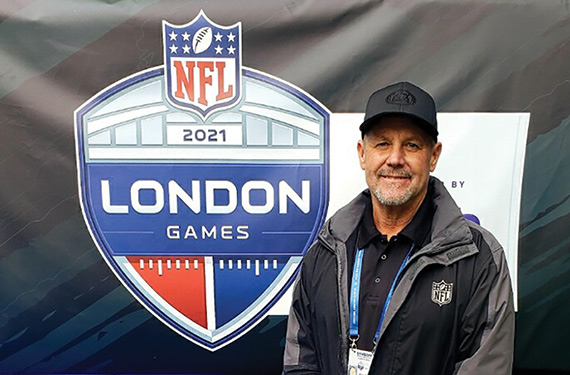 In simple terms, sports turf is a combination of grass, athletes and minutes on the clock. For those of us who know the profession intimately, we strive to understand the complex science of grass, work to ensure the well-being of athletes, and constantly battle with the clock.

In simple terms, Wayne Ward will hang up his cleats in April 2022 after 30 years with the Tampa Sports Authority. However, for those who have worked alongside Wayne for the past 30 years – learning from him, benefiting from his friendship – they know his legacy as a NFL groundskeeper and friend will outlast any minute on the clock.

In 1992, Wayne Ward began his stint with the Tampa Bay Buccaneers in his home state of Florida. Ward had aspirations to become a high school agriculture teacher, but his career goals changed after taking an internship at Tampa Bay’s, The Big Sombrero stadium. Now, months shy of retirement, Ward is credited with creating several of the standards groundskeepers strive for today. For decades, Ward has been leading his team as Director of Turf and Grounds at Raymond James Stadium. Responsible for everything living and breathing, down to every palm tree and every inch of grass.

Ward reflected on the shift in tides he experienced back in the late ‘90s. Not only was Ward expected to provide a playing surface for the NFL, his stadium would also become home to the University of South Florida Bulls, Pro Bowl games, and a full calendar of events year after year. Ward said, “when we moved into the new stadium, that’s when people really started paying attention to the quality of football fields and its effect on game play and player safety. The minute I changed my own mind set and the culture from being a ‘grass guy’ to empowering myself to be the expert and the professional, things shifted not only for me but throughout the industry. I wanted to perform at the same level the athletes who played on my field performed. I wanted to be just as dedicated to their game as they were. Today, you see that kind of passion in groundskeepers across the board. I’m honored to have been at the forefront of that change. I tell my younger guys, it’s wide open right now. We’ve kicked the door open for them and it’s up to them to take it to the next level.” 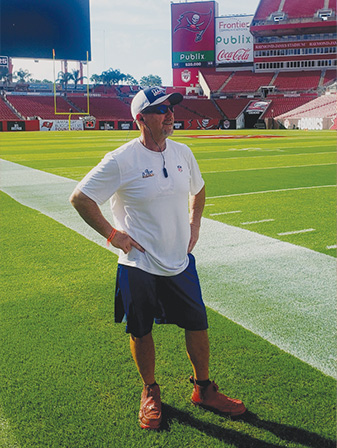 Ward was one of the first to kick the door open on some of the grass innovations we see today that have become the lifeline of our industry. Ward successfully converted his field from college games on Saturday to NFL kickoff on Sundays, followed up by a concert the next week, time and time again. Matt Greiner, Director of Grounds for the San Francisco 49ers described his longtime friend as, “just a good old boy from Florida.” Greiner went on to talk about how Ward has elevated the expectation of groundskeepers and what his legacy in the NFL will be. Greiner said, "for the past 30 years, Wayne has been a vocal leader and trendsetter as a multi-use facility groundskeeper."

There has been a transition in the league where the expectations of a groundskeeper is elevated and it’s because of professionals like Wayne who have shown what can be accomplished. He continually gets the job done, and he will be able to look back and know that he knocked it out of the park every time.” Greiner and Ward share a similar passion for big games and growing grass. Greiner reflected on helping Ward with the 2018 National Championship hosted in Tampa Bay and then calling on Ward to help him host the same event at his stadium two years later. Greiner said the experience was surreal for an avid college football fan. Greiner said, “Wayne understands the rush. I’ve experienced it with him and you’ll see him patrolling the sideline with his intense look. His smile starts to emerge after kickoff and there’s no better feeling than seeing that wide receiver cut a dime on the surface you created.”

The rush, the final product, and the grind of the game have been rewarding elements of Ward’s career that make up the past 30 years. After 29 years in the business and 29 covid tests, Ward was able to host the Super Bowl in his hometown, for his home team. Gigs like the Super Bowl have afforded Ward many opportunities, including connecting with some of the mentors he attributes some of his most successful practices to. Ward worked alongside Super Bowl groundskeeper greats like George Toma, Ed Mangan and Don Follett.

Don Follett, retired groundskeeper for the Baltimore Ravens, said, “Wayne loves talking shop with his fellow groundskeepers. He’s a colleague that will always find an answer for you and a friend that never lets you down. In every element of his life, Wayne’s dedication is unmatched. His field in Tampa is one of the best. He’s an incredible friend and family man.”

Tony Leonard, Director of Grounds for the Philadelphia Eagles, shared a similar sentiment for his friend Ward. Leonard said, “Wayne has a way to make everyone laugh and have a good time. He has helped many of us through tough stretches and with any question about sports turf, which he has done very well for a long time. He brings so much experience and knowledge to the NFL, along with a great attitude. He’s done some great things in Tampa with Raymond James Stadium and hosted just about everything you can possibly imagine. He will be missed there. But knowing Wayne, he won’t be too far removed from the people that make this industry great.” 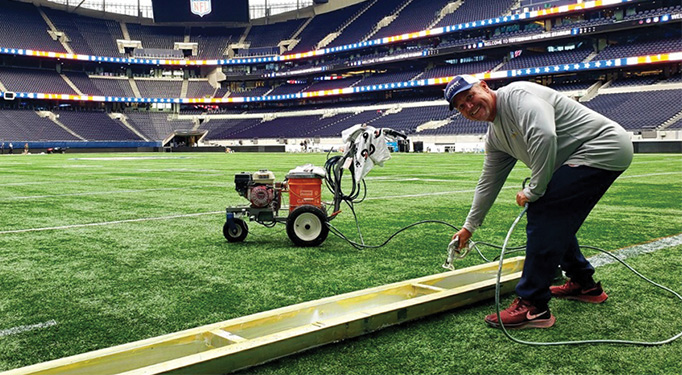 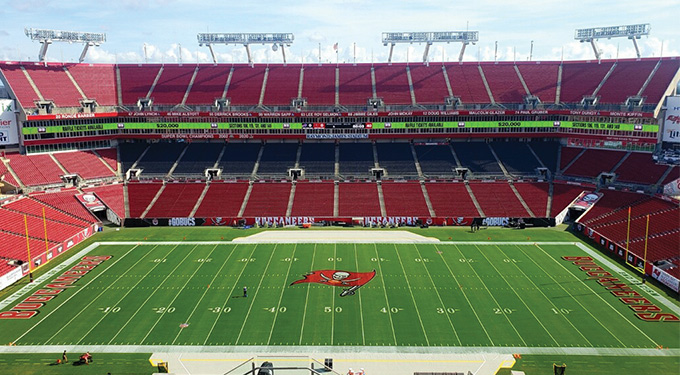 We were lucky to reflect with Wayne on his 30 year turf career. We asked him the obvious questions like, “how did you stay motivated during a 30 hour field conversion with no sleep?” Wayne said, “like I tell my crew, how do you move a mountain? One shovel at a time.” We wanted to know what his plans for retirement were and he assured us he’ll be staying close. And we asked him what some of his fondest memories of the job were. Wayne said it’s been a surreal experience for him and his family to grow up in this job. His kids and grandkids all have had the chance to experience the atmosphere he had a part in creating.

Lastly, We asked Wayne what he’ll miss most about the career he’s built his life around. As Ward reflected, he said tears filled his eyes. We assume it’s not because of the late nights or the sometimes finicky grass, but because Wayne Ward gave his career every ounce of himself, every single time to the task at hand, to the crew working beside him, and to the industry he loves.