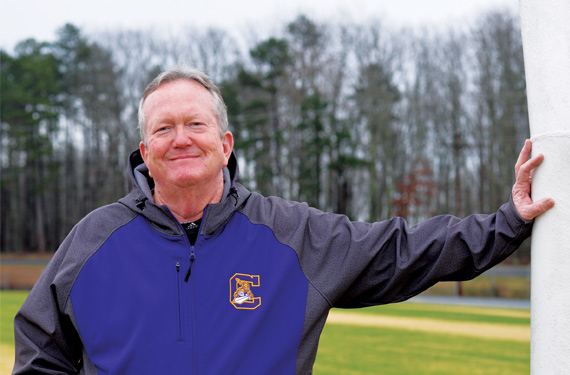 The final seconds check off the clock in southside Virginia at Central Lunenburg High School. The football team has just brought home another win as the stands are filled with former and future members of the charger community. On the sideline, Coach Wallace Owen is soaking in a feeling that is difficult to duplicate. For the past 36 years, Coach Owen has experienced many wins from the sideline. It’s in those final seconds before the teams meet to shake hands that Coach Owen cherishes the most.

Grit, community, perseverance, excellence. Coach, mentor, father, grandpa and husband. Just a handful of the words that describe the legacy of Wallace Owen. When people think of the man that dedicated his life to his southside Virginia County, he hopes his story brings a smile to their face.

Today, Wallace Owen serves as the school’s athletic director, driving instructor, football defensive coordinator, head track coach and resident historian. Coach Owen described himself as the last man standing. After joining the team back in 1985, Coach Owen has gone on to witness state championships, struggle and loss and the opportunity to work with several generations of the charger family. While Coach Owen has most likely walked over 1,000 miles behind a paint machine, the community and the kids are what really mean the most to him. Coach Owen said, “the best part of the job is being a part of this community. I’ve had the chance to work with many of these kids' fathers and even some grandfathers. Our motto is once a charger, always a charger, that means something to the people of this County.” Being a pillar of the Lunenburg legacy is something Coach Owen takes great pride in.

Cal Spencer, Coach Owen’s former player, spoke of the impact and legacy he believes Owen has had in their community. “Coach O has taught or mentored thousands of students, and because of his length of service, he has mentored multiple generations of the same family. I played tight end for Wallace in the 1980's, and my son played tight end and linebacker for Wallace just a few years ago. I think Wallace's greatest legacy will be twofold: the success of his former athletes off of the field and his impact on local youth football. You learn in life from watching role models, and Wallace has served as a role model to thousands of young people throughout his career. Secondly, when the local youth football league re-started after a lengthy absence, Wallace was one of its biggest supporters. He worked with the League to permit youth games to be played on the high school field, and he personally supported fundraising efforts. It was a testament to his impact when almost every youth football coach in that League played for Coach Owen.”

Owen reflected, “coaching and field management are unique tasks because everyone sees the results of your efforts. Whether that’s how the team plays or how the field looks. I try to create something here that the kids and our fans can be proud of, week after week, that’s what I want for our charger community.”

Pride and a desire for excellence are qualities Owen said he formed in the early years of his life. As a son to a WWII marine veteran, Owen said his father instilled in him the values that have carried him through his life and career. Owen noted, “My father taught me to take pride in what I do. For me this job has never been 9-5. I’ve always been willing to make the extra effort or spend the time that’s needed to get the job done. When you walk off this field, the job doesn’t leave you. Sometimes, you’ve got to bow down and do what needs to be done. Again, my father taught me to never ask anything of anyone that you haven’t been willing or done yourself. I live by that advice, be the first one to get your hands dirty or volunteer for the task, the rest will take care of itself.”

William Thomas, head coach of the charger football team, says his players really respect Coach Owen because they see him out there lining the field or going above and beyond, setting the scene for Friday night. Thomas said Owen’s commitment to excellence is unprecedented, “when I’m ready to throw in the towel, Coach Owen will say, “you go ahead, I’m going to stay behind and figure this out.” Thomas said that you rarely come across people like Coach Owen, who are always willing to show up, no matter the time or task. Thomas said Coach Owen has been the constant for the program, school and community over the years, that his dedication deserves praise. 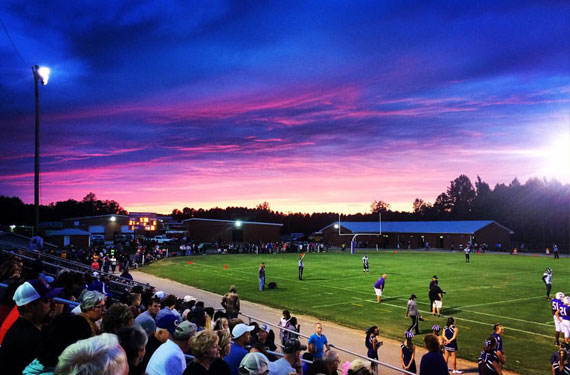 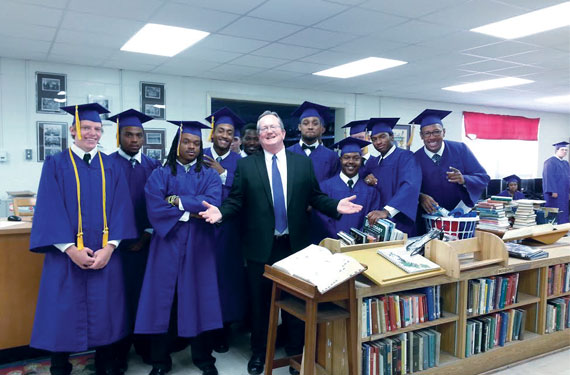 Thomas said, “Lunenburg, is a typical southside Virginia town. We’ve experienced hard times and recession, but through it all people like Coach O have persevered. Coach Owen has been our constant.” Thomas went from being a JV player for Owen to coaching alongside him. Today, the two have made it their mission to teach the students and athletes of Lunenburg about grit and seeing things through. Thomas said Coach Owen is an embodiment of those values.

One way Coach Owen loves to connect with the kids is through sports turf. As athletic director his list of to do’s can become lengthy. Coach Owen will involve the kids in preparing the fields, whether they’re holding the line or bringing him tools. He teaches them, “everyone does a little, so no one has to do a lot.” Helping create the final picture is something he says the students all take pride in.

The final picture is something that reaffirms Coach Owen’s passion each time he does his “ceremonial viewing” from the press box after getting the field game ready. Taking in the view is something he started doing back in the 1990's when he took over the responsibility of field management from Al Crymes. Owen said the two would admire their work from the press box windows. Crymes was so thankful to Owen for taking the job that no matter how the lines looked, Crymes would say “that’s the best it’s ever looked”. The two coached alongside each other and Chip Chappel for two decades. Owen said, those were the glory days, coaching with two gentlemen that were not only great coaches but great friends as well. The principles the three of them developed served as the foundation for what Owen has continued to do through his work at Central Lunenburg.

Chip Chappell, former head coach of the Central Lunenburg chargers, said, “Al Crymes and Wallace were my guys, we won a lot of football games together. When I think about the legacy we built, I know Wallace will be remembered in the community for the way he’s improved the facility and how he would do anything for these kids. Personally, I will always admire Wallace for his honesty, his dependability, his loyalty and his friendship. He’s an incredible coach, a great friend and an all around amazing person.”

While Coach Owen jokingly referred to himself as the ‘last man standing’. He fondly remembers the days with Crymes and Chappel and is proud of what he’s currently creating with Thomas and crew. Coach Owen says he’s been fortunate to work with so many different members of the coaching staff. He said through the years it’s always been a team effort, “anyone who has had the chance to touch this field or work with these kids deserves recognition. We have built something special here for our community.”

Many teams have had their time in charger stadium. While generations of the charger community have Coach Owen to thank in part for the memories they’ve created on the football field. Coach Owen says he owes a great deal of his credit to his wife, Cindy. “I couldn’t ask for a better partner in life, especially with this job. My wife has always been the rock. This job can be very demanding on the family because you’re required to be away from home for long hours. Where am I the happiest? That’s the easiest answer, it’s when I’m with my family, I love spending time with my wife, my sons and daughter and my grandkids. A charger win is a close second.”

Cal Spencer added commentary about the Owen family, “Wallace’s wife, Cindy and his children, Clay, Scott and Ginny are all mainstays at Central High School games, along with his grandchildren. They all come to support the family patriarch and the sport he so dearly loves.”

In closing, Coach Owen reflected, “When I think back on my time here, I have come across so many characters that add life to the stories I share. I’ve filled in where I was needed and I’ve worn several different hats. No day has been the same, with the goal and challenge always changing, but I’ve had a very satisfying career. For the past 35 years I’ve been getting paid to do something I truly love. I’ve learned that it’s always been worth the effort but it’s important to not take yourself too seriously. I hope that when I’m gone and people think of Coach O, they smile.”