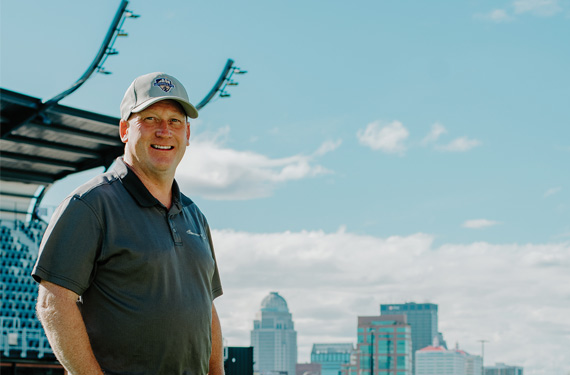 In 2020, starting over was destined to bring on new challenges for Tom Nielsen, head groundskeeper at Lynn Family Stadium. All eyes would be on the industry vet as he worked to open a stadium in Louisville, Kentucky that would become home to Louisville City FC. Nielsen felt prepared to move on to soccer and looked forward to returning to grass after a long stint in baseball.

After finding himself on the Brewers staff, Nielsen would go on to work for six different baseball clubs and communities, but his professional training began long before he stepped foot in County Stadium. For this industry veteran, he started practicing the art of turf at age seven in Milwaukee, WI where he converted his family’s three-and-a-half acre lot into a neighborhood sanctuary. Every year Nielsen would transition his backyard from baseball to football and back again with lines and maintenance techniques that would prepare him for the future. By age nine, Nielsen created a destination that made his childhood home the place to be. Decades later he would do the same thing at Slugger Field in Louisville, Kentucky. But it wasn’t the award winning stadium that was attracting turf professionals from all around, but rather Nielsen himself.

Under Nielsen, Slugger Field was recognized as one of the best in baseball. Nielsen believed that was because when you have good people around you, you have good turf. “I’ve never been the best groundskeeper but I always strived to be the best leader that a crew could have,” a humble Nielsen told us. “Working at Slugger Field gave me the opportunity to reach so many kids and create a family.” Mentorship and creating that family on the field became his biggest priority when Nielsen saw what kind of field a crew that operated as a unit could achieve. Nielsen noted, “I quickly learned my mentorship could be far reaching when I realized these kids would leave me and go on to create turf families of their own with similar principles and values.”

Groundskeeping was Nielsen’s ticket to baseball, but the job became his ticket to make a real difference. Nielsen said, “my passion became preparing young professionals to leave me and be able to run a facility of their own on day one. I have had the chance to see over 55 turf managers who started under me go on to assist or run shows of their own, that’s the dream.” 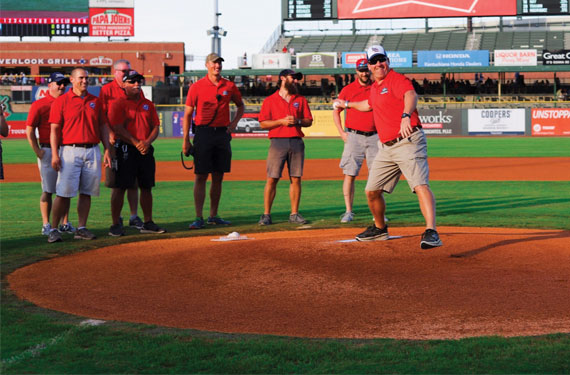 The principles that Nielsen taught would travel with each kid beyond the minor league field located in the heart of the transition zone. Those leaving Slugger Field began to leave an impact that was felt throughout the industry… and The Nielsen Mafia was born. Tom Nielsen became known as the “sodfather” to a group of proud turfies in the industry who had the chance to work under the industry vet and learn his tricks of the trade. Nielsen reflected, “my biggest accomplishment in my 29 years is the Nielsen Mafia. I’ve always hoped my legacy would be built upon the leader I was and not necessarily the turf I managed. Baseball was never the most important thing about my job, but it was the platform that allowed me to teach these kids the way of life.” While teaching his crew how to prepare game-ready fields, Nielsen was also teaching them to be good people and even better teammates. One of the most important lessons Nielsen likes to teach by example is that it’s easy to be in a good mood when everything is going as it should. But it’s even more important to be calm and collected when everything is going wrong.

Nielsen’s favorite time to share a story or insight that could impact a kid's career was when he or she was holding a hose watering the infield clay. When Nielsen wasn’t teaching on the field, he and his team were hitting the streets to run or bike over their lunch breaks, just another avenue where Nielsen could share his philosophies on life. Brock White, head groundskeeper for the Arkansas Natural and former crew member of Nielsen’s reflected on what it was like working for Tom. “We would show up for work at 8 a.m., work until noon, and then go out with Tom and run for miles -- and then come back for the rest of our 15 hour shift. Thinking back I don’t know how we all did that but that’s the kind of energy and motivation that Tom cultivated as a leader.” White said it was during those workouts and on the field that Nielsen taught him how to treat your crew and create a workplace that people wanted to come to. Those are the lessons he’s carried with him as he now leads his own team. 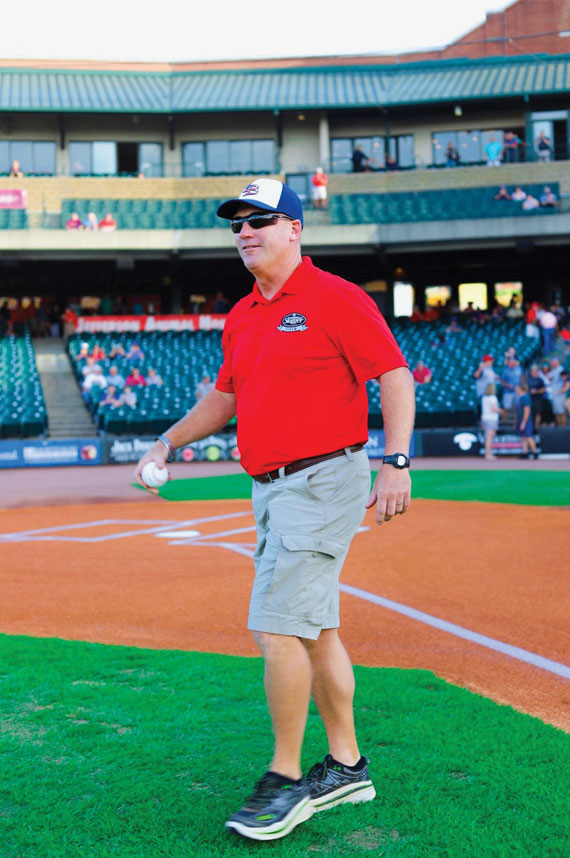 Nielsen felt responsible for teaching his crew about the art of balance. He took them out to exercise during work because he wanted them to be healthy, both physically and mentally. He also preached to them about the importance of a healthy home life and how those relationships at home would become the life-line to a successful career. Nielsen was speaking from experience, as he credits his wife Anne of 22 years to be the real anchor to his long career in baseball. “The divorce rate in baseball is far too high, I was beyond blessed to have a strong woman on the home front that supported me and helped me achieve that balance.” Having his family at home helped Nielsen give his family on the field, 100%.

Nielsen gave each and every employee 100% because that kind of responsibility is what got him out of bed every morning. Nielsen never wanted to be the boss that became a burden on the crew, but rather he wanted to be someone they missed when he wasn’t around. When he reflects back on his time in baseball, Nielsen said, “if I can give someone a purpose through turf, especially someone who might be struggling, there really is no greater accomplishment. If I have a part in turning around someone’s fate, that’s by far what I’m most proud of in my career.”

During his long run in baseball it was never about the wins or losses but always about those working on his crew. He reflected, “In my 29 years, I can’t tell you about the biggest plays or the home runs I witnessed, but I remember each face of every crew member I ever had working beside me”.

We asked Nielsen about the emotions he experienced when leaving baseball, it again came back to the importance of mentorship. Nielsen noted, “I always realized the position would change because of age and the demanding schedule. I felt a lot of anxiety about leaving the mentorship behind, but I know the kids I had the chance to impact have gone on to impact others because of the philosophies I taught them while they were on my crew. I’m passing on the torch and I know torches will continue to be lit and passed on”.

Those who have gone on to carry the Nielsen Mafia’s name to stadiums and fields across the globe owe a bit of their success to the man that put their experience at the top of his priority list. Craig Samtisell, a former crew member of Nielsen’s, has continued his career in sports turf by modeling his management style after his long time friend, Nielsen. Samtisell shared, “Tom is the best blend of professionalism, mentorship and humor. His best attribute is his ability to teach us about life through talking turf. Tom always spoke to people like they were people and in a lot of ways I’ve modeled how I manage teams today after what I learned from Tom.” Samtisell added, “I can’t say enough about what he did for me and my career.”

Nielsen is a man who attracts people and warrants respect throughout our industry. As the Nielsen Mafia embarks on a new path in professional soccer, we’re looking forward to seeing who the Sodfather is able to recruit in his new territory.