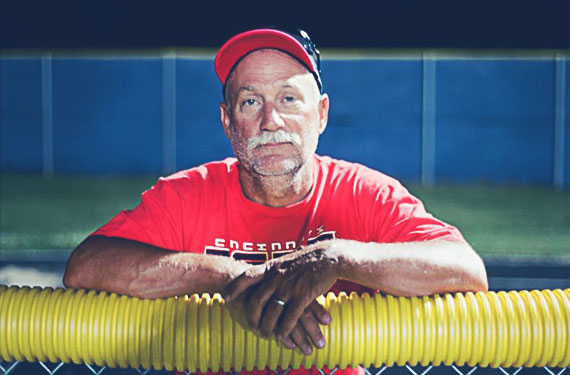 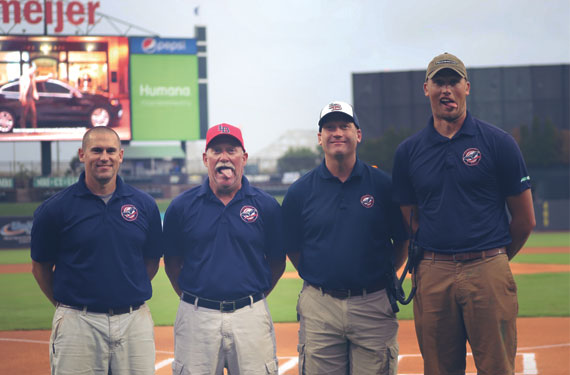 When I interviewed Tod Shafer I asked him, “how would your co-workers and boss describe you?” His response, “old.” While Tod may have a few years on the majority of his crew, Shafer hasn’t let his late start to sports turf slow him down.

As he looked forward to retirement from air traffic control, Shafer’s son was playing baseball for Oldham County High School in Buckner, Kentucky. At the beginning of the season, Shafer sat in the stands watching the head coach at the time, Scott Gerlach, race around the field trying to single-handedly maintain the field while coaching a group of high school boys. Before Shafer could even get out the full question of whether or not Gerlach was interested in some help, Gerlach was saying YES! Shafer didn’t know it at the time but he was about to discover a passion that would have him ramping up in retirement opposed to slowing down.

Scott Gerlach acknowledged that he was lucky to have so many great parents helping him take care of the fields but he said, “Tod went way above and beyond.” While the two would initially meet on the high school field, Shafer would eventually follow Gerlach to work alongside him at Slugger Stadium in Louisville, Kentucky. “When Tod began helping me at Oldham County, I would educate him on what we do to create a safe playing field for players. Tod dove right in and asked a ton of questions and became really interested in learning more. At the time, he was a season ticket holder for the Louisville Bats, and I would see him at the games and chat with him and Tommy (Shafer’s son). At the end of one season, for the last home game I asked Tod if he would want to spend a day on the grounds crew with us, and he got excited. The day he was out there with us he had a blast and was learning a lot.”

“At the end of the game, Tom (Nielsen, former head groundskeeper at Slugger Field) asked Tod if he was interested in being on the grounds crew the following season. He said yes, and that started Tod’s career in sports turf management.”

Once Shafer got a taste for the thrill of groundskeeping, he was off to the races. He became a sponge, attempting to learn everything he could about sports turf as it became his new passion project. Shafer had to study everything on the job. He quickly realized it was all about talking to the right people and surrounding himself with people who we’re willing to share. Luckily for Shafer, this industry has proved to be supportive. Shafer attended STMA conferences and seminars so he could come back to Gerlach and teach his mentor a few things as well. The advantage of learning late was that Shafer never had to read about a technique in a book and wait four years to put it into practice. He would be taught the best way to do something and then instantly test it out on the field.

For Shafer, the field became his classroom. Shafer believes there are only barriers in sports turf if you make them. “Sure, we can’t control Mother Nature but I never let my age or lack of experience stand in the way.” Shafer says, “I embraced the challenge of something new and it has changed my life.” Because of sports turf, Shafer’s perspective has changed on what it means to go into work and collaborate with a younger team. “My second career is like going to play instead of going to work. And because of this job, I have a new appreciation for the younger generation. I get to work with kids every day at Slugger Field on the crew and also work for high school students who play on my fields at Oldham county. A lot of the kids in this generation may have a bad rep, but the kids I have the pleasure of working with are some of the elite. They’re pretty amazing, hard-working individuals, passionate about their futures. Every day on the field is a teaching opportunity. I love watching a kid come here for seasonal work and then, because of their exposure with our team, see them consider this as a long term career.”

Sure, we can’t control Mother Nature but I never let my age or lack of experience stand in the way. I embraced the challenge of something new and it has changed my life.”

Who would have thought that a retired air traffic controller would become a mentor to the next generation of sports turf professionals at Slugger Field? Not only does Shafer love sharing his passion for sports turf with the younger students and teaching them, Tod’s positive attitude and values are translated to be long-lasting lessons for the younger crew members. Aaron Fink, head groundskeeper at Slugger Field, says that Tod is an excellent role model for his younger staff. “I’ve witnessed Tod being a mentor to our interns many times at Louisville Slugger Field. Tod doesn’t hesitate to stop and teach them ‘the right way to do things.’ He truly believes in working hard and teaching the younger generation his old school values. Everybody enjoys being with him each day, especially when he takes them out to eat at Brownies, his favorite restaurant, for beers and wings.”

While retirement for some includes sipping coffee on the front porch, watching birds and calling their grandkids, Shafer is on the move from sunrise to sundown. He rolls out of bed and makes his way over to Slugger Field by 8 a.m. He starts each day mowing the field and by lunch he may be working on equipment or riding the bunker rake along the infield. If it’s not game day, Shafer is on his way to the high school by 3 p.m. Most summer nights Tod is working under the stadium lights whether he’s mowing at the high school or dragging the field after a Bats game. Even when Shafer’s day includes five tarp pulls, he loves sitting back with his team, dripping wet, soaking in the moment by laughing off the grueling work. Shafer’s best days? When he can take a step back and appreciate what he’s doing. Shafer says, “There’s nothing like cutting and striping the field and admiring the field from the stands. That kind of instant gratification keeps me coming back to the field each day.”

Fink reflects on where Tod feels at home on their team. “Tod is our expert mower, every morning he is in charge of mowing the field. We make fun of him for going slow, but there’s no doubt the lines will be straight and a single blade won’t be missed.” Shafer is truly in his element when he’s not only making the field look it’s best, but he’s impacting a fan’s day or making his crew laugh. Fink says, “Almost every time he is dragging the field before or after the game, Tod will scan the stands for kids and invite them onto the field to ride on his lap while he drags the infield. This small act has made many kids’ nights and now we even have some fans that just come to the game for the grounds crew!”

There’s nothing like cutting and striping the field and admiring the field from the stands. That kind of instant gratification keeps me coming back to the field each day.”

We weren’t content with Shafer’s answer when we asked how his co-workers would describe this Pioneer in the field. So, we asked them, how would you describe Tod? We had a feeling they would have a lot more to say. Tom Nielsen, former head groundskeeper for the Louisville Bats says, “Tod is one of my best friends. His passion for baseball and turf inspires our entire team. While some of these younger guys may think he came over with Lewis and Clark, I value the opportunity to work alongside him. We both get to do what we love every day and he’s a friend and co-worker that would do anything for you.”

Aaron Fink, head groundskeeper for the Louisville Bats, says, “Tod is an old school guy, he is vocal about his thoughts and what he believes in, but at the end of the day he will give you the shirt off his back to help a fellow friend. I think Tod is a Pioneer because of the path he has paved for young students and retired adults looking to join and succeed in our industry. He shows that it is never too late to start something new, even if it can be demanding at times.”

Scott Gerlach, former head coach at Oldham County High School and groundskeeper for the Louisville Bats, said, “working at Slugger Field is always more enjoyable when Tod is there. He has fun doing what he does and he is always encouraging and teaching other people so that they are better equipped to do their jobs with confidence and success. He has a great sense of humor and he’s fun to be around. People look forward going to work when they are working with someone like Tod. There are many other jobs where people have a ‘boss’, but when you work with someone like Tod, you don’t have a ‘boss’, you have a friend.”

It’s clear that Shafer sets out each day knowing he’s going to give it his all and do the absolute best he can. He lives by the technique “Keep It Simple, Stupid”, but his positive attitude and outlook on the job are what makes him a great co-worker and friend.

After our initial interview, we planned to follow up with Shafer in late August, the start of high school football. Shafer had a feeling, “it’s going to be a pretty good day.” This past summer Shafer undertook the challenge of rehabbing the football field at Oldham County High School. In the spring he started by sprigging Northbridge Bermuda, a variety he’s had experience working with 5-6 years at Slugger.

Shafer believed once he’d finish, it would be one of the biggest accomplishments of his career. We know he’s already accomplished something great because he goes into work each day with a smile on his face, doing what he loves.