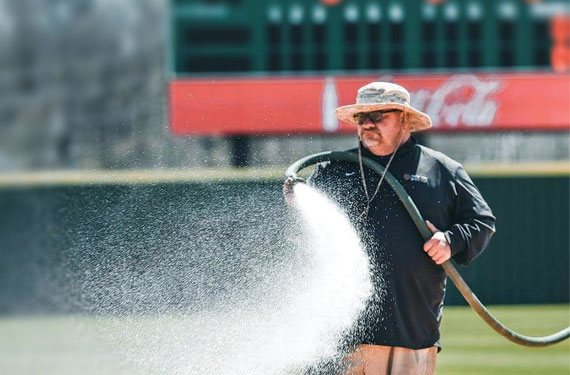 Union City Tennessee is the textbook definition of small town U.S.A. Idyllic streets and strong community. T-ball practice and Friday Night Lights. And in the textbook next to the definition of intense sits a photo of Stephen Crockett, the director and field operator for Union City. Crockett and Union City athletics are a synonymous term, you can’t have one without the other. His unprecedented attention to detail and passion for his craft are why people have asked, “does everyone in sports turf bring this much intensity?” Upon meeting the man behind the boonie hat and khaki shorts, you start to understand why he’s coined the term, extreme sports turf management.

Crockett brings an above and beyond level of meticulous care to the fields that set the backdrop for his community, Union City. Small town legend says that on any given day Crockett can command an entire group of kids simply by looming over the field with his “I mean business” presence and voice. But peel away his rough and tough exterior and you’ll find a small town guy who truly wants the best for the kids growing up in his community

In Union City, everybody knows everyone. Because of that, there’s an unspoken mentality where each person plays a role in raising and teaching the kids of the community to be kind and responsible. Crockett takes great pride in being able to teach Union City kids a thing or two through turf and the love of the game. Crockett said it’s the kids that fuel his desire for perfection. “It’s all about the kids for me. I played on mediocre fields growing up and I don’t want the locals to have the same experience”, Crockett explained. “We set high expectations for the kids that play on these fields. They’re removing turf and learning what it takes to maintain fields. I believe that for the kids who want to play, they will take care of the field. They have a sense of pride about it as well”. 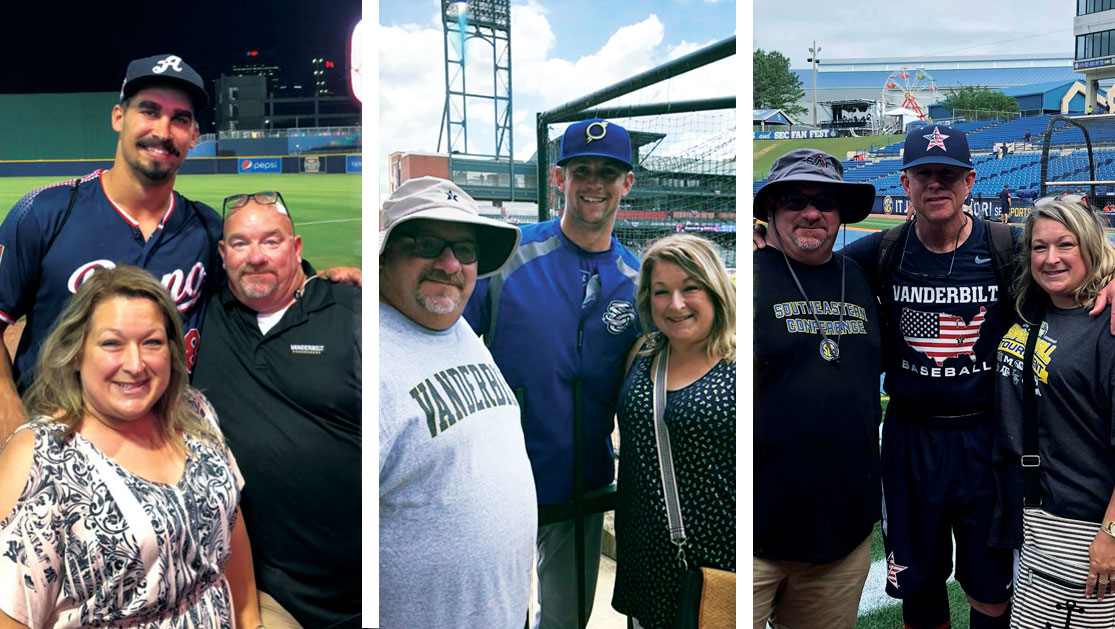 One proud moment for Crockett occurred when kids from out of town came in for a baseball tournament and asked why there was kitty litter on the diamond. Plenty of players from Union City took the time to educate them about conditioner and shake their heads at their ignorance.

It’s not about the praise from the parents that Crockett is seeking, in fact Crockett mentioned that he’s an equal opportunity person. He makes sure to piss everyone off because at the end of the day he’s there for the kids. His favorite kind of compliment? When a kid’s love for sports grows because of turf and Crockett’s ability to make it cool.

Crockett may add more y’alls and ain’ts than most, but his passion and skill have been acknowledged throughout the industry. Between speaking at conferences about the art of sports turf and catching attention for his purple field, Crockett has put Union City on the map. Crockett said he runs his crew like the big leagues. He expects his fields to replicate what someone might see on TV or experience at the collegiate level. He not only maintains the campus and fields for the school district, but he and his crew also bear the responsibility of the Graham Park Complex in Union City as well. Any sport memory made in Union City, Crockett has a hand in making it.

When we prompted Crockett to talk about the weather, or the schedule or people messing up his field, the elements of the job most STM’s complain about, he wouldn’t budge. At every turn, Crockett stressed that he never complains about the gig he gets to do, a gig most people call a job. It’s one of the greatest loves in life. He doesn’t mind being at the school before sun up and finishing up at the park long after sun down because every minute on the clock is a minute he’s getting to do something he truly loves. He’s rare to complain about a team or coach messing something up on the field because he says, “I want them to mess up, gives me a new challenge and something to fix.” And even though he’s in the “dead center of the hell that is the transition zone”, you won’t find Crockett upset about the unpredictability of the weather because that’s what keeps things fresh each day. 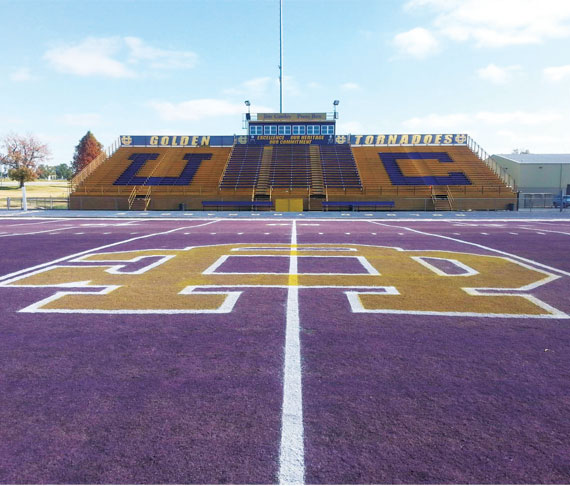 One element of the job that is his favorite? Growing grass as thick as he can. Crockett has a real passion for natural grass fields and seeing just how much they can handle when maintained properly. As a visual motivator, the grass is his daily pat on the back when he’s able to step back and see exactly what he was able to accomplish that day. After making sure safety is number one, Crockett loves to play around with themes and painting to help engage the community and kids. One of his claims to fame is his purple field, which he endlessly worked with his vendor to find the exact shade before covering every inch of the field in Union City pride.

Ryan Storey of Vanderbilt University said the reason Crockett’s approach is so unique is because of his innovation. He never settles. Storey says when Crockett sees something on the professional level or a cool design on TV, he takes it straight to the field to replicate it for the kids of Union City. Crockett calls it the practice of “positive stealing” and is always looking for ways to make his craft bigger and better. The SEC tournament, where Storey and Crockett met in 2001, serves as a platform for Crockett’s daily practices to have their time on the big screen.

Storey said that anyone who knows Crockett personally knows he is a guy who will do anything for you and he takes his role seriously within his community. When we asked Storey where he imagines Crockett to be his happiest, he said, “Crockett would be watering his infield. When he pulls out the hose during baseball season, you get to see another side to Crockett. He loves it so much. He has his own walk-out song for when he takes the field. And for anyone who knows him professionally, they know he is a no-nonsense sports turf manager. When things need to get done, Crockett is a guy his community can rely on and he never fails to deliver.”

Glenn Ross, friend of Crockett, says there are many reasons he loves working with the no-nonsense professional. Ross said, “Crockett is extremely knowledgeable. When you work with Crockett, he is clear and concise. He gives you direct information no matter the context. In today’s world where so many people give you bits and pieces of the picture, there is nothing more refreshing than to talk with Crockett; someone who always gives you the whole picture every time. He is someone I can always depend on and someone I trust.”

Crockett claimed that there are few times when people can catch a smile on his face, and those are on the rare days when his fields are near perfect. Crockett talked about how people can find him supporting his trademark look: boonie hat, khaki shorts and all business attitude. A look so iconic it would serve as the perfect Union City bobblehead.

While Crockett may design the bobblehead to fit an idea of how he thinks people see him, after getting the whole, clear picture on who Crockett is, we believe there should be more. His bobble head would have to include his cat and him holding a hose. By his side, his wife Ronda who he loves touring sports facilities around the country with. Put that all together and the Union City Crockett bobblehead might actually be designed to include the largest smile seen on a souvenir to date.

And we’d be the first in line to purchase it!