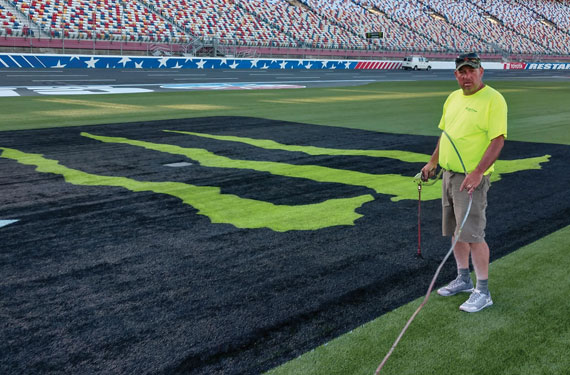 What do most people see when they look at a field of grass? They might survey the color, height or fullness. But their general analysis doesn’t go beyond the surface. For an elite sector of grass groupies, our research goes deeper. We utilize our five senses to really get an idea of what is impacting the grass and, more importantly, what’s going on below the surface.

For Pete Thibeault, turf supervisor at Noble and Greenough School in Dedham, Massachusetts, making critical analysis of the grass and soil profiles is one of his favorite aspects of the gig. But what do we get when we take a look at the career and life of Pete Thibeault? Sure, you’re initially met with an undeniable New England accent and his groundskeeper uniform, work boots, baseball cap and school sweatshirt. You might dig a bit deeper and discover his knack for painting or his ability to assess the problem areas of high trafficked surfaces. But when you really get to the core of Pete Thibeault, you’ll find the reason we included him in our campaign. He’s a man of grit, curiosity, passion and kindness. A groundskeeper who creates fields that demand respect and a cherished friend, coworker, husband and father.

How do we know these things? Well because of the kind of guy Thibeault is, we definitely didn’t hear about it from his mouth. We had to do some critical analysis of our own to find out more about the man behind the beautiful fields in Dedham, Mass.

When you take a general survey of the industry, you’ll find that Thibeault is known for his exceptional professionalism when it comes to the surfaces he manages. His paint skills have been featured on national television and wowed audiences. Throughout the industry he’s known for his relentless desire to be better and his expertise for award winning fields. Chris Fiore met Thibeault through the Sports Turf Managers Association over 10 years ago. Fiore said, “I’ve been all over the world, painting at world renowned stadiums, and there really is nothing like stepping onto Pete’s fields. You can show people pictures or describe the castle at Noble and Greenough’s campus, but until you step foot onto one of Pete’s fields with the castle in the backdrop, wow, it’s really something. It definitely competes as one of my favorite turf views.”

Next, we went to his coworkers to gather more data. For those who work closely with Thibeault, they say it’s pure drive and passion for the job that gets him started before 4 a.m. every day. They credit Thibeault’s love for the craft and his ability to always be ready for whatever the day might throw at him. If they’re looking for him on campus they can usually find him in the lower end, tending to the fields or hopping on and off vehicles. Constantly moving until the day is done.

Director of facilities, Mike McHugh, says that from the moment he took the job he knew he wouldn’t have to worry about the campus, because when you take one look at the fields you can tell whoever is managing them knows what they’re doing. McHugh added, “Pete loves his grass and everything that has to do with it, but what makes Pete a Pioneer is that he doesn’t just want to show up to perfection. He wants the challenge to make something great himself. Pete is in his element when he’s looking at a field and assessing how to make it better. You can see all the solutions working in his mind.” McHugh said there isn’t a better view than looking out from home plate of their baseball field during the spring season.

Dylan Satter has had the pleasure of being Thibeault’s “work wife” for the past 16 years. Satter credits Thibeault for his long career in sports turf. Satter believes that if it wasn’t for Thibeault, he wouldn’t have seen the potential the job had to become a fulfilling career. Satter said, “I was just 19 years old when I started with Noble and at that time it wasn’t supposed to be a career for me. It became my career because of Pete and his passion. He pushed for further education and I had never met anyone so serious about grass. Pete changed my work ethic, he showed me how to work smarter, not harder. I was just a kid and Pete really molded me into the worker I am today. He lit a fire under me to take ownership and, even when I didn’t see the potential for myself, he saw it for me.” 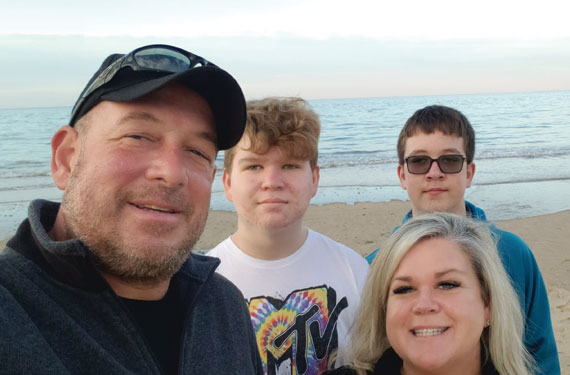 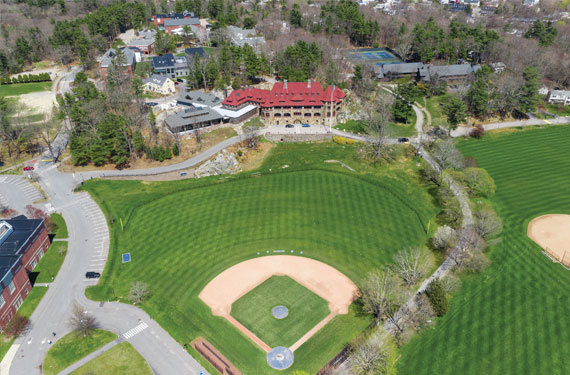 Lastly, we went to the heart of the source, Thibeault’s friends and family. We wanted to understand who Thibeault is on and off the grass. Infectious was a common quality that came up. People gravitate towards Thibeault because of his infectious laugh, smile and attitude. His friends said, “Pete is like gravity, whether we’re on a plane, out around town or at an event, people are drawn to him.” His wife, Andrea, is witness to her husband’s relentless drive. “Peter is gifted at his job, but as a father and husband, he is the absolute best. He is always trying to be better, he goes the extra mile at work and at home with me and the boys.”

It becomes quickly evident to anyone who knows or works alongside Thibeault that his approach and attitude is what makes his work noteworthy. Thibeault’s interest in sports turf piqued after college while working for a grass company. His passion became rooted in perfecting his craft and continually pushing himself to be better. Twenty-two years later, he’s still finding new ways to further his skill set and pursue new challenges.

We thought Thibeault's willingness to explore new territory could be credited to his upbringing in Plymouth, Massachusetts. But Thibeault says it’s about creating a backdrop for a kid who is creating life-long memories on his fields that really fuels his desire to always innovate. Thibeault’s philosophy has always been, “It may not always be one of our players that is going to have the game of their life, it could be a kid from across town. But whosoever big day it is, they’re always going to remember what field it happened on.”

Another stage Thibeault loves to set for someone’s big day includes racing stripes and loud engines. Thibeault made sure it was known throughout the industry that he was prepared to be called up to the big leagues and he was given the chance when NASCAR called on him because of his skills with the painting wand. Thibeault said, “the first time I saw my work on TV, it really made an impact on me and continues to fuel my drive. The paint display is larger than life and I love that the day is all hustle and bustle. I love being able to create something that truly impacts the event.”

In New England, the weather is always throwing Thibeault a challenge to overcome. Pair that with 25 athletic fields and a demanding events schedule, and the day is always entertaining. Thibeault says New England and the changing seasons keeps him, “always rolling onto the next thing.” Thibeault says, “before football can really wear on you, we’re moving on to the next sport or season, it’s always fresh.” But when Thibeault finally heads home for the day, he says that’s when the real show starts. With two boys and a wife at home, Thibeault says he loves cooking for his family and traveling together. Thibeault takes his philosophies from the field and applies that to life lessons for his sons. Thibeault says, “just like in turf, if you ain’t trying something new, you’re not trying your best. I always tell my boys, if you ain’t failing, you ain’t trying. I hope they see that I’m always willing to put myself out there and they do the same when given the chance.”

Another life lesson Thibeault practices in turf is to, “not stress too much about the things you cannot control.” And this past year that idea was definitely put to the test. However, whatever was thrown at Thibeault in 2020, he remained a positive force in the lives of his work family and those who depend on him at home. Dylan Satter reflected on what Thibeault has been able to accomplish against all odds and said, “in this industry, if Pete has an opportunity to be acknowledged, he is more than deserving of anything that is being given to him.” We couldn’t agree more.