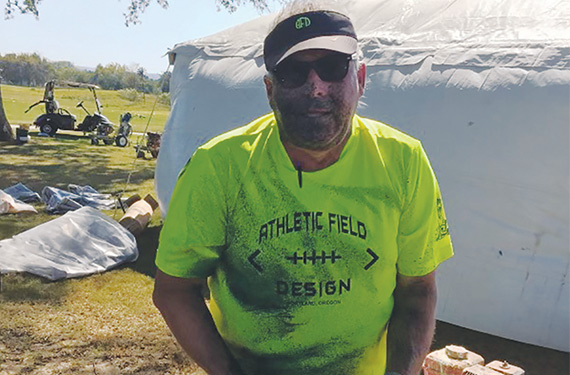 “AFD911, please state your emergency.” Mike Hebrard, owner and operator of Athletic Field Design, answers his phone knowing that a groundskeeper is on the other end looking for his help. His day can begin driving in one direction and a call will end up taking him the opposite way. For the past forty-plus years Hebrard has been innovating solutions and changing direction to make his business work in the sports turf industry. What began as a line cutting service, Athletic Field Design has morphed into whatever the industry was in need of. Today, Hebrard consults clients on how to construct, renovate, or brand their surfaces. For Hebrard, that sometimes means freehanding a logo at center field, laser grading a field, or inventing something to make his day-to-day life more efficient.

The self-proclaimed head groundskeeper of the state of Oregon, Hebrard calls his gig the corndog circuit. The little towns he comes to rescue are always happy to see him because he’s equipped with the tools and experience to take their field to the next level. Hebrard takes pride in the career he’s created in the sports turf industry, a career that started long before sports turf was “cool”. Hebrard said, “I’ve been doing this for forty-plus years and I’ve had to be innovative from the get go. A lot of the challenges we were faced with didn’t have solutions yet when I started out. I’ve always loved that element of the job, inventing something to make my day easier.”

That’s how Hebrard came across the Disc, which has been one of his longest sports turf love affairs. Thirty years ago, Hebrard came across a prototype for a disc that would make painting crisper, cleaner and quicker. When the company who was manufacturing the Disc switched gears, Hebrard got their blessing to start making his own product by enhancing their design. 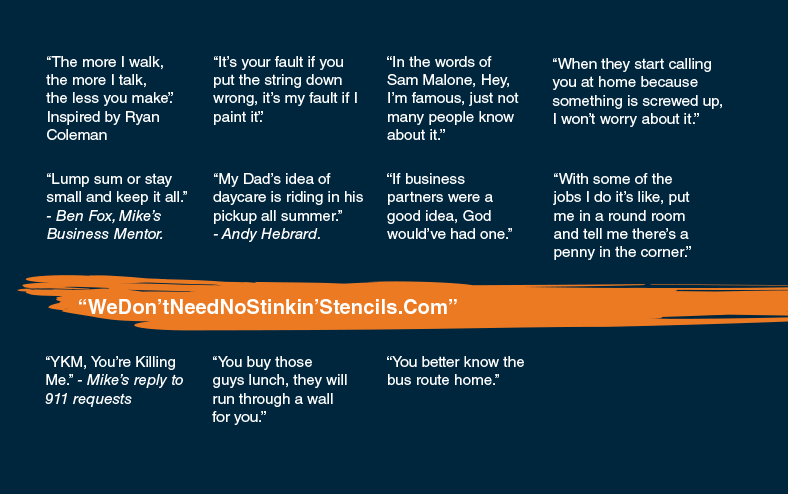 The Disc or his knack for freehanding a logo might be the first impression people have of Mike Hebrard and his career. But, it’s his ability to innovate on the fly, his giving nature, and his limitless passion that will leave a lasting impact on the industry. While Hebrard didn’t always have a map to follow when he started out on his sports turf journey, he has created a blueprint through his work that will serve as textbook practice for years to come.

Hebrard’s son Andy, who started working alongside his father at a young age, has taken that blueprint and made a business of his own. Hebrard attributes his son’s career as the most rewarding element of his long career. Andy’s sports turf painting business, Athletic Applications, is following in the footsteps of his father and will serve as a part of Hebrard’s legacy. However, Andy says it’s more than the painting technique that he learned from his dad. “My Dad never missed a game. His dedication and passion as a father is replicated in his work. I wanted that flexibility as I started my own business so that I could show up for my family as well. My Dad embodies the George Toma “and then some” mentality in every element of his life. As a father, as a friend, and as a professional. He’s never strayed away from a challenge. His work ethic is something to be admired and his willingness to always offer a helping hand is not something you find in everyone’s DNA.” 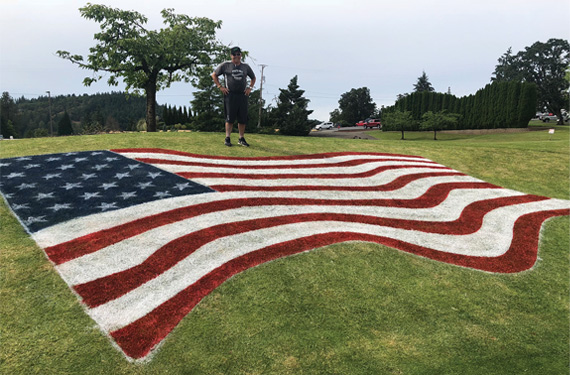 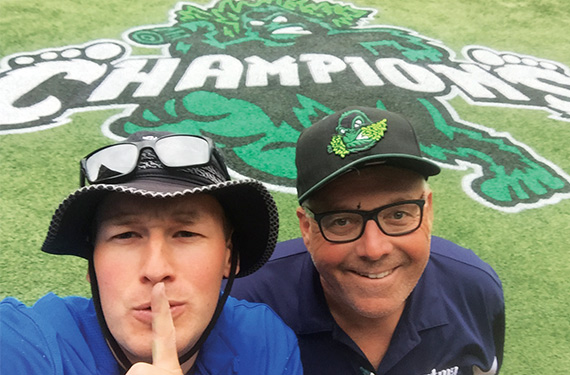 The father and son’s similarities go beyond the playing field. While both can be counted on to leave your surface better than they found it, the way they care for their people is what others value about them. Samuel King, groundskeeper for the Hillsboro Hops, loves working alongside both Hebrard and his son, Andy, because of their shared approach. King said, “In my eyes, Mike is a living legend. He has written his own book in the game and cemented himself in this area of the country as the go-to guy for field and painting needs. But, what I value the most about Mike is his massive heart, which is something he has instilled in his son Andy as well. In times of uncertainty, both Mike and Andy were people I could rely on. Their loyalty and the way they care for people is their business’ greatest asset.”

Mike Hebrard started Athletics Field Design on his 40th birthday as a gift to himself and his family. With no business or marketing class to back his ambition, Hebrard utilized his ability to invent solutions and contraptions to solve any issue he came across. He built trusting relationships with ADs and facility managers. And he cemented himself as a household name in the sports turf industry because of his classic one liners, his ability to flourish under pressure, and the love he has for the job.

When we asked Hebrard where he feels most at home in the industry he loves, it became clear that it’s not about one place or field, it’s about the people. He created a career that has spanned across several decades and state lines. And a legacy that will impact the industry for years to come.