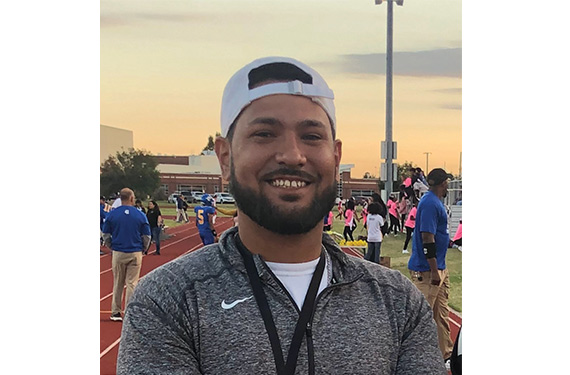 Is there a moment you can attribute to changing the course of your life? If we asked you to look back, who were the people, the places, and the things that had you staring down a fork in the road that would lead you to your next challenge or adventure?

It’s late afternoon at Moses F. Miller stadium in Oklahoma and Mike Garcia, the stadium foreman, is climbing the bleachers so he can take in the view from the press box. Each week he takes a moment to appreciate all the hours and work that go into creating that final product. The crisp, white lines he loves painting and the stadium that he takes pride in presenting to his community. He loves staring down at the field which will be host to a winning team’s celebration in a few hours. The job for Garcia is more than a clock-in, clock-out operation, it’s become his way of life. An adventure that started when someone took a chance on him and handed him the opportunity to choose his next great path.

Before becoming stadium foreman, Garcia was working for the district to help maintain the school grounds. His work ethic caught the attention of the athletic field supervisor at the time, Tracy Schniwise. Not long after, Schniwise offered Garcia a promotion to stadium foreman. Five years later, the district credits Garcia with elevating the stadium’s playability and aesthetics and say he’s the definition of someone who takes pride in their work.

Pride was a common theme in Garcia’s reflection of his job. He wore a smile on his face when he thought about all the people who have played a role in getting him where he is today. He shows up each day to make them proud, while simultaneously giving the student athletes of Oklahoma City Public Schools a field they can perform on. Garcia said, “Tracy took a risk when hiring me, because he knew he’d have to teach me. He is responsible for everything I know and giving me this chance. I wouldn’t be here without him. Mentorship in this industry is vital. Tracy guided me both professionally and personally.” 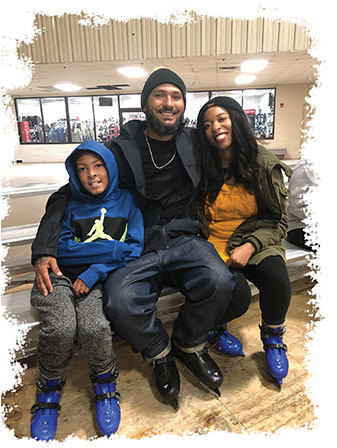 Tracy Schniwise gave Mike the chance to change his course and Tracy reflected on how glad he was to have Mike join the team. Tracy said, “Mike had very limited knowledge on athletic field maintenance but his eagerness to learn made it a very smooth transition. His capacity for learning is very high and that, coupled with his willingness to learn, allowed him to succeed almost immediately. I think Mike is happiest when he’s able to make something better. He knows his facility is a reflection on the entire school district and wants anyone who comes into his stadium to walk away with a good impression of OKCPS. That benefits the reputation of the district as well as himself. Our industry needs more people like Mike, his relentless commitment to improvement and trying to move in the right direction makes him a pioneer. And it doesn’t stop at work. With his family, he is always trying to do the right thing and make everything better”.

Two other men who greatly impacted Garcia’s path and passion share his same name. Garcia spoke of his father’s tremendous work ethic as something he always admired. Something he now tries to emulate for his own son, who Garica says is the reason he keeps going. Garcia said, “when my son turned two, he was in that stage of following me everywhere, all over my legs, always at my feet. It dawned on me that everything I did from that moment on was for him. Similar to how I watched and learned from my father, I want to be someone great that my son can admire.”

What Garcia is able to accomplish week after week exceeds a level of greatness his peers all admire. Josh Abbott, Athletic Grounds Supervisor for OKCPS, said that Garcia is known throughout the district because of his work ethic and attitude towards life. “Mike comes into work every day with a smile saying ‘top of the morning!’. I value Mike’s approach to the job. He is all business. He’s truly in his element when he is working on his field, head down, getting the job done, no matter the challenge. At the end of the day, Mike is all about his family. I admire what Mike has been able to accomplish because he came up in a tough situation and he is a well rounded man who loves his son and his fiance, Grace, more than anything.” 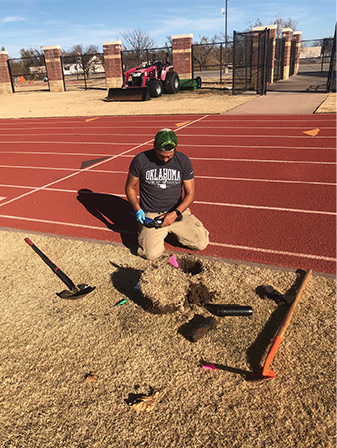 Being a groundskeeper can mean a lot of time away from your loved ones, but it’s Garcia’s family who fuels his motivation. Garcia, as stadium foreman, is present for every game or event. First one to arrive, last one to leave. As a one man band, Garcia says the time flies. “I’ll spend the day prepping the field, walking the grounds, mentally preparing for the night. At 5:30, the buses start rolling in, and that energy and anticipation you feel from the athletes, coaches, fans and families is unmatched. The best feeling is watching the aftermath of a big win unfold on your field. I get chills every time. The pride those families feel bombarding the field to celebrate with their kid, it’s impossible to put into words. I feel those emotions, and empathy is powerful. I love that at the end of a day like that, I also get to go home to my family. I’m doing a job that provides for them, and each day I make the decision to produce great playing fields.”