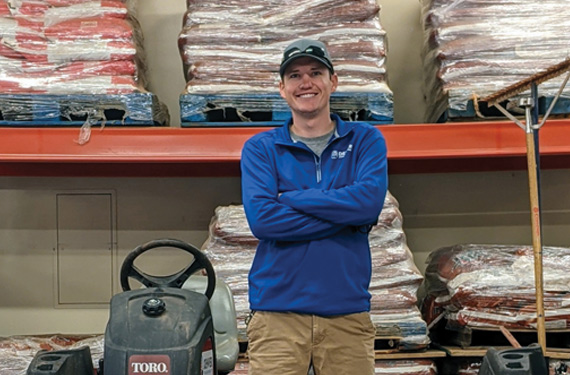 Leaving everything better than how he found it. A simple, yet driving philosophy for Athletic Field Operations Supervisor, Michael Saaranen of Denver City Parks and Rec. And quite the undertaking when we’re talking about 220 fields.

In one week’s time, Saaranen and his crew are leaving each of their fields better than they found them, across the entire city of Denver. With time and weather as the crew’s consistent adversary, Saaranen empowers his crew through trust, positivity and pride.

Born and raised in Iowa, Saaranen described finding sports turf as an instant love. The small town, self-proclaimed “sports junkie” saw sports turf as his way to see the world. After working two seasons with the Boston Red Sox, followed by two seasons with the San Diego Padres, Saaranen moved to the Mile High City to bring his professional knowledge to the parks and rec scene.

When Saaranen joined the Colorado crew three years ago, he hunkered down and got right to work. Once he had a handle on the system, his coworkers and supervisors say Saaranen’s approach elevated their success to a new level.

By leaving the big ballparks behind, Saaranen brought his level of dedication and professionalism to the homefront. The techniques and strategies may be the same but, for Saaranen, working directly in his community adds another rewarding element to the job.

“Because this is parks and rec and our user groups are neighbors, friends, family, I feel a ton of responsibility for what we’re building here. So, everyday I buy into the idea of bettering the program and bettering myself while constantly upping our level of professionalism.” 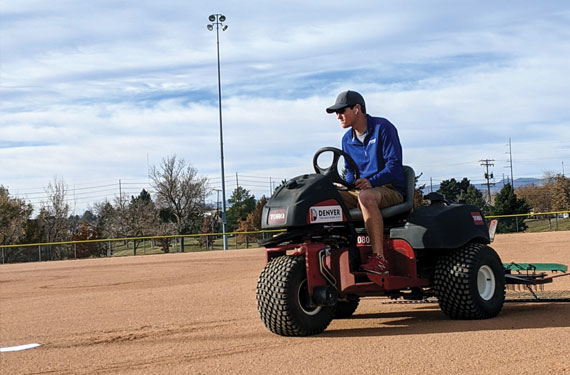 Abby McNeal, a pillar in our industry, says Saaranen’s system “is improving field safety and playability. He takes an issue and utilizes his skills to improve the field and safety conditions. Michael’s system and approach is making a lasting impression with our user groups because of the extra time and effort he puts forward.”

The system that keeps the machine moving? Saaranen’s spreadsheets. With 220 fields, there's quite a bit to keep track of, such as: What fields need paint, what needs weeding, what user groups liked this technique, what data needs to be collected, where to send people, what routes need covered, assignments, priorities. All this and more starts running through Saaranen’s mind starting at 4:30 a.m. every morning. Once all his ducks are in a row, he starts picking up the scraps. If a hole needs digging or “grunt work” needs to be completed, Saaranen is the first to get his hands dirty. Saaranen said, “ I want to be working right alongside my crew when things are difficult. And when things go wrong, I try to lead with positivity. I don’t want anyone to think they’re above a certain task, including myself. So, that means jumping on the faulty piece of equipment or picking up the scraps when needed.”

Nick Baslistries, Saaranen’s supervisor, credits Saaranen’s ability to relate to his crew as truly remarkable. Baslistries says, “Michael is a hard working, loyal and honest team player. Each year he takes more and more off my plate. Now, three years in, he is running the show independently. That’s a testament to how he trains his crew and his attitude in the face of a challenge.” 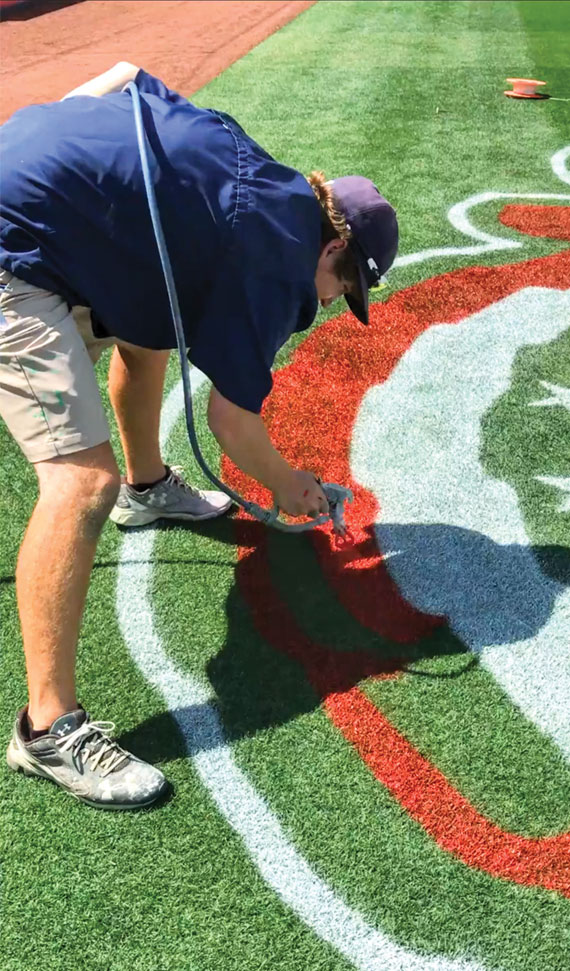 But with 220 fields, Saaranen can’t always be there when things go wrong. So, how does he manage to help his crew from afar? Saaranen empowers his crew by trusting them and challenging them to take accountability each day they set out with their marching orders. He encourages them to remain positive when things are challenging and to take pride in the work they do for their community. Saaranen said, “since I can’t be at each field every day, it’s really about having your crew buy into what you’re doing. Whether it’s because they’re a part of this community or they take responsibility in pushing the industry forward, I preach taking pride in your work.”

Empowerment and accountability are philosophies Saaranen credits back to his leaders, Abby McNeal and Nick Baslistries. Saaranen said, “with Nick and Abby, they trusted me from day one. They put me right in the driver’s seat and were always giving me a chance to try and learn new things. Right out of the gate I was empowered to better myself and the system and now that’s something I strive to pass on.”

McNeal says Michael’s exceptional management of everything on his plate, and doing it with grace and innovation, makes him a pioneer. “Michael manages 12 or so seasonal laborers to install, measure, paint and prep our athletic fields. He and his crew touch over 200 fields a week, he plans and executes that tall order perfectly. What he is able to facilitate with his team, through training and trust, is something really exceptional. The team he creates and manages leaves an incredible impression and impact on this community. Michael has brought another level of professionalism to this program with his attention to safety, playability and performance.”

Each day looks different for Saaranen and crew. Different parts of the city can look different within one day. Across the entire city, Saaranen could be battling rain and sleet in one corner, while his team is shoveling snow in another. “When you’re managing over 220 fields with 14 people, time and weather are always the challenge. When the elements are bad, since we cover the entire city, it could be downpouring in the southeast and sunny in the southwest. I think over the past couple years I’ve gotten better at giving compliments. When someone really impresses me, or my team is able to accomplish what we set out to do, I make sure to give credit where credit is due.”

Saaranen gives credit to his father for instilling in him the need for perfection. That’s what he strives for everyday and sets the same expectations for his crew. “At the beginning of each season, I explain to my crew that it’s our responsibility to the community and the industry to continue to improve ourselves and the surfaces we manage. Sometimes you don’t hear from peers unless something is wrong. So I strive to get ahead of that by listening to our user groups; to make sure we’re meeting everyone’s needs. I’m a very motivated person that rarely feels satisfied. I definitely get that from my dad, he gave me his work ethic and nauseating pursuit of perfection.”

A perfect day in Saaranen’s eyes? Off the field, he loves being with his dogs in the mountains or swimming. A zen work day, as Saaranen described it, would include installing an athletic field. Saaranen said, “I love dirt and clay work. Anytime I can go out by myself and install a new athletic field, that’s bliss. We lose a lot of our fields over the winter, so reinstalling is always a process. I love going out with a vision and executing that to install a new, playbale field. That process of dialing in a field and fine tuning is what I love.”

Each time Saaranen installs a new field, trains a new crew member, or discovers a new data point, he’s making a lasting impression in the city of Denver and our industry. He hopes that as their crew continues to improve and expand, they’re able to have people buy into the process he’s helped create alongside McNeal and Baslistries. He believes in what they’re doing and so do we.