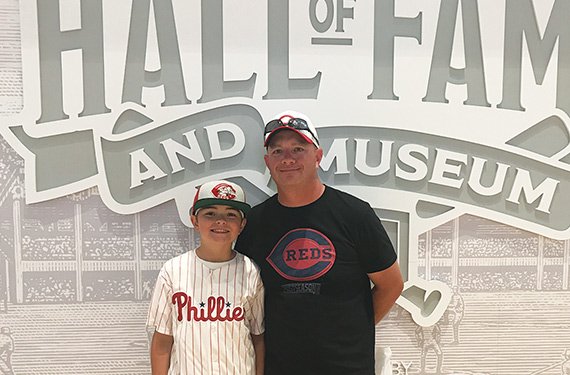 “Whether it be as a human being or a groundskeeper, I want to be remembered as great.”

Great is, to some, an everyday adjective. For John Clintsman, Head of Grounds at Ensworth School, it’s his guidepost for everything he does in life. As a boss, as a crew member, father, and husband. His desire for greatness is not a simple feat. Greatness encompasses long hours, unpredictable obstacles, and the balance of it all.

When Clintsman turned thirty, he needed a change. His first job was on a golf course, working for Monica Lindy. What started as mowing grass transformed into a total sports turf love affair. Clintsman became a student of the craft and wanted to learn everything there was to know. He reflected on his appreciation for those mentors he had early on in the job, who truly changed his course of life. Clintsman said, “there have been a couple of people along the way who I credit with my success, because they took me under their wing and gave me a career I love. I’m constantly looking to pay it forward so our industry continues to thrive.”

For Clintsman, it’s because of leaders like Thomas Trotter with the Nashville Sounds, Dr. Goatley with Virginia Tech, and Michael Brownlee with Simplot that he puts such value on mentorship. “My ultimate goal in the industry is to be someone’s Dr. Goatley, Trotter or Brownlee one day. I didn’t have the opportunity to go to college and Dr. Goatley has been that professor for me. Trotter showed me exactly who I wanted to be as a boss. And Brownlee was one of the first people to empower me as a groundskeeper by creating my own fertilizer program. I hope someday, someone is sitting down and talking about the start or knowledge I gave them.”

Thomas Trotter spoke of his former employee as someone he knows who will make a difference through mentorship. Trotter said, “I see John being someone who will launch the careers of many young turf industry workers. He’s definitely one of the best guys to teach the ins and outs of our industry.”

Dr. Goatley admires Clintsman’s passion for the industry and the way Clintsman treats him as a colleague instead of an academic. Dr. Goatley recalled their first meeting, “four to five years ago, John connected with my wife Lisa and me at an STMA conference. John was telling her about how excited he was about a new book he picked up at the conference. She asked if John wanted the co-author to sign the book and then she looked at me and said, ‘would you mind signing John’s book?’ We had a good laugh about that and really enjoyed meeting John that day. From that point forward John and I have stayed in touch, with me learning as much, if not more, from him than he from me.”

Clintsman spoke about the nature of the sports turf industry and the way we learn from one another as something he loves. He described turf professionals as a corps of brothers and sisters who truly want each other to succeed. Clintsman tries to replicate the industry’s strengths with his tight knit crew. Clintsman says his greatest accomplishment at the end of every season is the crew he built.

You can’t arrive at Ensworth school on a Friday night without being greeted by the grounds crew. Come game time, you can see them standing as a unit in the corner of the stadium, taking pride in what they’re able to accomplish together. Michael Brownlee has witnessed the kind of leader Clintsman is on the job. Brownlee shared, “John enjoys going the extra mile. Early mornings and late nights are when he’s at his best. John is committed to growing his knowledge, and that of his employees. He makes a concerted effort each day to better his facility, his staff, and himself.”

Clintsman reiterated what his peers see in him. He said, “I try to be the boss that I’d want, and I love that my crew takes pride and ownership in this job. We win together and face the challenges of the job as a team.”

In March 2021, the challenge of the job was far out of their control when Nashville and Ensworth were under 10 feet of water after a major flood hit the area. Months after winning TTA Field of the Year, their canvas was washed away, forcing the crew to rally together to recover. Clintsman recalled, “after winning the TTA Field of the Year, we were on top of the world. Only to have the flood hit us and everything we had accomplished to that point, no longer mattered. Didn’t matter how great we were, it became about what we did from then on. How we were going to recover as a community and crew.”

The comeback the crew was able to make is noteworthy. The Ensworth crew field designs and paint jobs have become industry favorites. Trademarked by their tiger at center field and their famous “pink out” details. This fall season, Clintsman and the crew had their campus dialed in and ready for play. Clintsman laughed, “time flies when you’re busting your butt.”

This past season, and every season, Clintsman takes great pride in being able to set the stage for Ensworth students. He said, “signing day for student athletes is a great reflection on our athletic department. But for the crew and me, wow, that’s a really special accomplishment for us. We make it a priority to help our kids shine. So when they go on to the next level, there’s an enormous amount of pride felt.”

There’s one student in particular at Ensworth that Clintsman hopes to see succeed. His son, Corbin. At the end of the day, Clintsman said he’s a father at his core. He loves that his job keeps him close to his son, as they spend the mornings driving to school together and evenings out on the field together. As the groundskeeper and coach for many of Corbin’s events, Clintsman said he’s at every practice, every game and Corbin works alongside his dad whenever he gets the chance. Clinstman said, “my son is my best friend. I hope his core memories of growing up are of him and me doing something we love, being happy. My wife Carrie and I hope he remembers how hard we worked to make him happy.”

John Clintsman hopes one day when his son tells his own kids about his dad, the word great comes up. When students think about the field they played on at Ensworth, he hopes those are great memories for them. He hopes his colleagues know him as a great friend. And when his crew talks about their boss, he hopes he was a great leader and mentor for their career.

While John Clintsman’s hopes guide and motivate him every day, it’s evident that he’s already achieved greatness as a father, husband, friend, and groundskeeper.