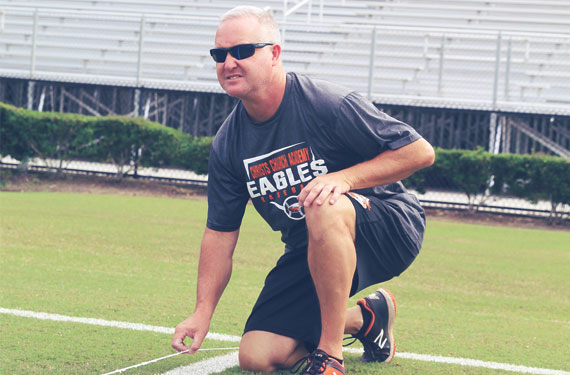 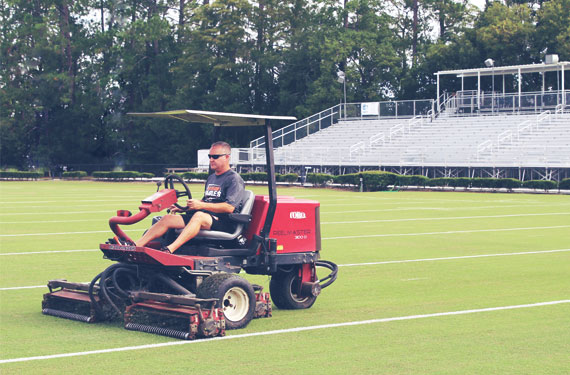 It’s 7:05 p.m. on Friday and parked in the endzone of Christ Church Academy’s stadium sits Jeff Feltman. This is the moment Feltman looks forward to all week; legs kicked up, admiring the field from his utility cart.

His only responsibility for the next couple of hours is to man the victory canon and send noise barreling through the stadium when his team scores. Come tomorrow, it’s back to the races for Feltman who is a full-time firefighter for the city of Jacksonville, part-time sports facility manager, director of football operations, and assistant baseball coach at CCA. Tonight, he’s just thankful he’s made it through another week.

Jeff Feltman became Christ Church Academy’s go-to grass guy seven years ago, but got his start with Bob West, helping maintain his alma mater’s baseball fields. His former baseball coach, West, would go on to show him the ropes but it’s Feltman’s 20 years as a Jacksonville first responder that would set his success apart. Fighting fires taught Feltman how to face the flames, which comes in handy when Feltman has to paint eight acres in extreme Florida temperatures. “I’m a born and raised Floridian and firefighter, so the heat doesn’t bother me, even when it takes 25,000 steps to paint my fields,” Feltman says.

Aside from handling the heat in both jobs, Feltman says discipline is at the core of firefighting and groundskeeping. “The fire station mirrors the military. You’re on time, you are kept to a strict set of standards and your uniform better look good,” says Feltman. “I try to teach that kind of discipline to my players on the baseball diamond but I also practice those values each day as the facility manager.” Even after responding to a 3 a.m. fire call, Feltman shows up to the school on time, to get the fields game day ready.

I’m a born and raised Floridian and firefighter, so the heat doesn’t bother me, even when it takes 25,000 steps to paint my fields."

At the station, safety is drilled into the first responders’ heads as the number one priority. So, it’s no surprise that Feltman allows safety to dictate his set of standards on the field. Feltman stresses, “it has to be safe before anything else. Luckily the school ensures I have everything I need to keep the fields safe and healthy.”

And just like his firefighter uniform, Feltman wants the fields to look it’s best. Feltman strives to maintain his fields so that his players experience consistent field conditions each time they suit up. “When the buzzer goes off at the station, I can’t be like ‘oh, I’m in the shower’ or ‘oh I’m busy’, you show up for the people that need you,” says Feltman. “It’s the same on the field, grass doesn’t stop growing and when players, coaches and fans are depending on you, you report for duty. I want these fields to be the best looking, safest fields these kids play on all year.”

Whether he’s coming from the station or from home, Monday morning kicks off at the school where he walks the grounds and surveys the scene. Tuesday, he reports back to the station at 7 a.m. for a 24 hour shift. Come Wednesday he’s back at the school and the next three days are spent prepping for soccer, baseball, softball and football games. Feltman’s friends and colleagues said when they think of Jeff, they picture him on a mower in the early morning, wearing his straw hat, getting the fields ready for another big week. There’s no off-season for Feltman.

Feltman is a bermudagrass loyalist saying, “bermuda can be finicky and require more maintenance but once you get a taste for perfection, it’s an addiction.” He cuts the fields every other day at 5/8 inches. He keeps the grass short to give off a crisp, tight appearance and then starts in on the marathon of painting the fields. “I’m not here just to put my eight hours in, I’m here to accomplish something great. That’s why I paint slow and steady, aiming for perfection,” says Feltman. “You can always tell the groundskeepers who do this for a job and those who do it out of love. I love this field; I call her my old girl.” Feltman’s former high school baseball coach and friend of 30 years, Bob West, says “Jeff is someone who puts his stamp on everything. He has great pride in going the extra mile and a real testament to his dedication is when visiting teams or coaches comment on the crew’s amazing job with the fields, not realizing, it’s just Jeff.”

For Feltman, when he’s not battling the clock, he’s in combat with Florida weather. We spoke with Feltman days after Hurricane Dorian blew through Jacksonville. Feltman was trying to restore his field so canceled games and events the storm caused could be rescheduled. “One day the grass is literally burning off the field because of our extreme heat, the next we’re under water because of a tropical storm or hurricane,” Feltman says. Everything is dependent on the forecast and budget. Feltman can only do so much with mother nature but he says, “I’m good at deciphering the difference between want and need.”

Bermuda (grass) can be finicky and require more maintenance but once you get a taste for perfection, it’s an addiction.”

Headmaster of Christ Church Academy, Madison Nichols, is the one fielding all of Feltman’s requests for wants and needs. The pair have known each other since elementary school and she loves to kid that Feltman could be caught on the field in the middle of the night with nail clippers attending to any blade that grows too tall. Nichols was a teacher at CCA when a boy walked into her class and, even after not seeing Feltman for years, knew Jeff must have been his father. When CCA first got their field of dreams, Nichols says it was a struggle at the beginning. The field is a transformer that has to fill many needs. “When Jeff volunteered to take over the field and make it something truly special, he gave our school and community something we could be proud of,” Nichols says. “His ‘old girl’ is Jeff’s gift back to these student athletes and their parents. Even though baseball is at Jeff’s core, he ensures that each sport has an exceptional ground for play.”

Nichols attributes Feltman’s sons’ current and future successes to their father who has shown them that hard work and ministry are significant values to hold. Nichols notes, “I’ve never met someone with such a capacity for giving. He has such a huge heart that puts community at the forefront of everything he does.” We asked Feltman how he manages to be a husband and father of two, on top of everything else. Feltman sighed as he spoke, “I don’t sleep much.” Feltman shows up for his people, which must be working because both his sons are looking to follow in his footsteps. One pursuing a career in sports management with dreams to work in the NFL and one hoping to become a firefighter after high school.

When a fire alarm isn’t jump-starting his day, what keeps Feltman going? Feltman credits the students’ passion for fueling his own drive and urgency. “It all becomes worth it each year when I attend the awards banquet and see all the players on the stage being honored for their work on the field and their exceptional work in the classroom,” Feltman says. “It makes me think, if they can juggle demanding practice/game schedules, school work, and a social life, I can give them my commitment. Their discipline and dedication to their craft drives me to perfect mine.”

Jeff is someone who puts his stamp on everything. He has great pride in going the extra mile and a real testament to his dedication is when visiting teams or coaches comment on the crew’s amazing job with the fields, not realizing, it’s just Jeff.”

Feltman also finds it rewarding when players will text him from the road to say they wish they were playing on his field. “I always get players and coaches texting me from the road. First they report – win or loss – and then they say how our field compares to others in the area,” says Feltman. Doug Anderson, assistant baseball coach at CCA says, “it’s a real blessing for these students to play on fields maintained by Jeff, they’re truly lucky to have him. I’ve played baseball all my life and traveled all over the world with my sons as they pursue careers in baseball and can honestly say Jeff’s diamond rivals most minor league and professional fields. I don’t know how the man physically manages that schedule but whatever credit he is given, he is all deserving.”

Feltman is a man his family, community and CCA can depend on. Whether it be the brightest white lines on the baseball diamond, being his sons’ biggest fan or fighting fires for someone’s safety, there’s heat, heart and disciple in everything he does.