From Neglect to Field of Excellence

In March 2017, the crew at Berea College in Kentucky was given the tall task of resuscitating a neglected soccer field.

In late March 2017, I was given the opportunity/challenge of restoring Berea College's Soccer Field. The field was originally a Bermuda 419 playing surface. Unfortunately, it had been neglected and cross contaminated with every cool season grass/weed known to man. I knew my only option was to kill off all the unwanted grass types and start from scratch. I knew that I wanted to stick with Bermuda; I just didn't know what variety. Like many things, money was going to play a vital role in my decision process. Sod was not an option and sprigs would have been costly, so I was left with several seeded varieties. After many discussions with peers and doing some research I decided to go with Riviera Bermuda grass. Riviera is tested and proven in this region, it was my logical choice.

Now that I had the grass type selected I needed to fix several drain lines and grade issues that were affecting the playing surface. Many of the lateral lines were either crushed or clogged. I was able to fix several of them by installing surface drains and snaking the existing drain lines. The field still drains poorly, but it has improved greatly and surface water flows off troubled areas better to newly installed surface drains.

Both the Men's and Women's team practice and compete on the same field. Communicating with the coaching staff has played a vital role in the longevity of the field this year. All warmup drills are done off site and the coaches have done an excellent job in rotating drills, especially in the goal mouth areas. (To aid in the longevity we install growth blankets in these areas) To date the field has hosted 15 regular season games and countless practices. 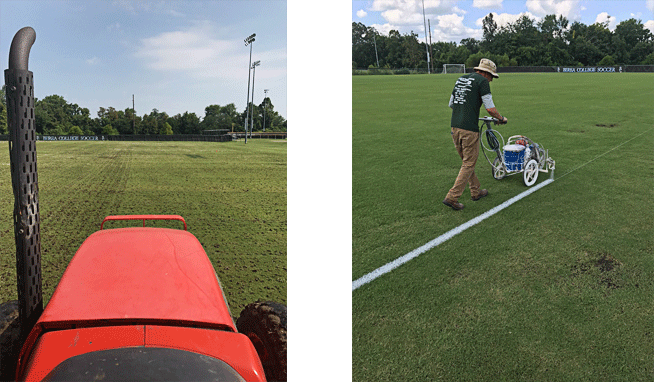 Prior to this I had never attempted a Bermuda grow-in of this magnitude. The 21 days post-seeding were by far the most stressful of the year. Our Men's coach made a comment to me shortly after we sprayed the field out in late March. He said, "Eric, I would have rather played on this sprayed out dead field than what we played on last season. At least we would have played on something consistent." That comment has stuck with me all year and I think back to what the field looked like in March and know that it will never look like that again. 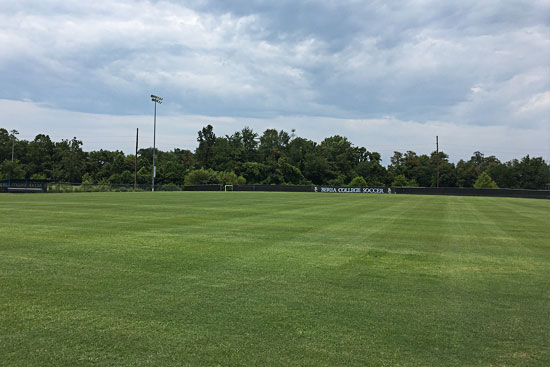 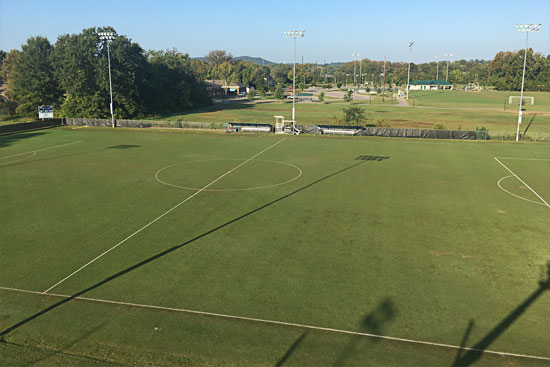 A few details on how we maintained our field:

A huge component in keeping our soccer field game ready was routine maintenance and a consistent fertilization plan.

* Note: We would have aerified/verticut at least once more but we left the field alone during the grow-in

Used a compost tea on the field on July 31st.

Berea College is a liberal arts work college in Berea, Kentucky that awards every enrolled student a no-tuition promise, making it possible for every student to graduate debt-free. The school attracts academically promising students with limited economic resources. Students at Berea integrate purposeful on-campus labor and community service with their classroom learning experiences.