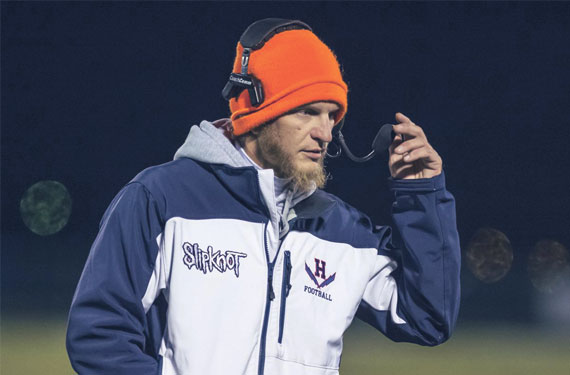 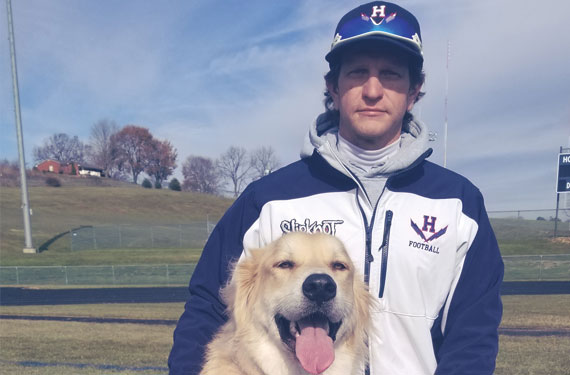 I first spoke to Josh Carico on a day he would describe as perfect. It was a late August morning, a sunny 75 degrees, with a calming breeze coming off the Massanutten mountain range. By 10 a.m. Carico had already mowed the school grounds, met with an outfitter who would be installing new fencing around the baseball fields and oversaw a mechanic working on a downed tractor.

Perfect was a long time coming for the IT professional turned groundskeeper who viewed his previous job site as more of a prison cell than an office. Carico’s new found happiness radiated throughout our conversation.

When Carico traded in his desk job to take a chance on turf eight years ago, he knew the basics of weeding and operating a lawn mower. He joined the Harrisonburg crew as a part-time worker with no experience and needed to rely on quick teachings to catch up. Carico was labeled as a city boy who never learned how to drive stick. He wanted to prove to his co-workers that he could not only get the job done but that he had some ideas of his own to amplify their performance.

Today, Carico is Harrisonburg’s head groundskeeper and football coach in the town he was born and raised in. At first Carico was just excited to be taking a 180 with his career. His mission and purpose became a lot clearer as Carico realized he had the opportunity to truly give back to the town that raised him. Carico has set out to aid in putting his hometown on the map with the work he does at the school and on the field. Along with his two man crew and Harrisonburg’s athletic director, Brandon Burley, Carico wants their school to be known as the best in the valley.

With 42 total acres to maintain and a limited staff, prioritizing is always the name of the game. Carico explained, “the days absolutely evaporate, we’re always being pulled in a hundred different directions.” Curb appeal, playability and safety are what we set out to achieve each day.” Carico’s pup, Arlo, is the alarm clock to Carico’s non-stop day. By 6:30 a.m. Carico is taking off on his mower to work on the school grounds. Once the grounds are in tip-top shape, he starts working on the fields. When 2:30 rolls around Carico is switching gears and meeting his students on the field for football practice. As evening settles in, Carico can be found in the locker room washing jerseys with his father, who he has the chance to coach alongside after being his player and student growing up. On days when soccer, baseball, softball and football all line up, Carico just prays it doesn’t rain and he gets working as soon as possible.

Being acknowledged in the industry has helped get others on board and bring attention to our mission as a school. It’s been extremely rewarding to go from being a part-time guy to the leader and see how much we’ve been able to accomplish.”

Carico’s aspirations were to take the program to the next level. When he first started under Eddie Hart and Amos Simmons, he never knew what they’d be able to accomplish. Carico credits industry recognition like Pioneer Athletics’ Fields of Excellence award for helping him take the program further. Carico said, “being acknowledged in the industry has helped get others on board and bring attention to our mission as a school. It’s been extremely rewarding to go from being a part-time guy to the leader and see how much we’ve been able to accomplish.” Today, the crew has come full circle as Carico is now leading his old mentor, Simmons, who joined the crew part-time after retiring. 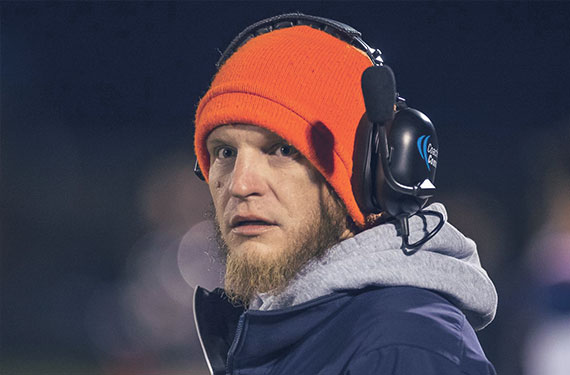 Carico says everything the crew does today is a bit of “redneck ingenuity”. With resources, budget and staff always limited, Carico has to make do with what he has. In efforts to always improve the efficiency of the staff, Carico converted an old Kawasaki Mule into a mobile painting machine. Carico says he is humbled in his efforts to make things work but it’s athletic director Brandon Burley who is the school’s real hype man. When Burley came on board, Carico said their goals aligned with wanting the school and campus to be recognized as something truly exceptional. Carico acknowledged that he was lucky to have an AD like Burley supporting him and his crew.

And the feeling is mutual. Burley credits Carico’s attention to detail for putting their school on the map. “Josh is one of the hardest working, most dedicated employees I have had the pleasure of working with. Josh takes initiative in keeping our campus immaculate. He often states attention to detail on the little things is just as important as the details on bigger projects. With each game, Josh looks to better our facilities by trying something new. This could be a different paint that is brighter, or attention to details on the midfield logos, or the little things he does to recognize our seniors on senior night.” Burley said that it’s Carico’s loyalty to the school and community that truly set him apart, noting that Carico is an “excellent example of Blue Streak pride.”

Josh is one of the hardest working, most dedicated employees I have had the pleasure of working with. Josh takes initiative in keeping our campus immaculate. He often states attention to detail on the little things is just as important as the details on bigger projects. With each game, Josh looks to better our facilities by trying something new."

For the visual guy who loves being able to look at his final product and instantly feel gratitude, Carico is right at home in his position, literally. Carico is an alum of Harrisonburg High and was attracted to the opportunity to give back to his community by working at the school and with future generations of students. Carico loves having the unique perspective of looking at both jobs with double lenses. When he’s painting the lines for game day, he’s focused on giving his player’s the best field conditions possible. When it comes time to practice, he’s yelling at kids to stay off the lines or rearranging drills to accommodate his maintenance schedule. The Harrisonburg football players directly benefit from the work their coach puts in each and every day. Lastly, he takes pride in working on fields that will craft many memories for his students, as it did for him years ago.

When his buddies give him a hard time for never leaving home, he lets them joke but Carico says there’s nothing better for him than rolling down the streets he knows and loves. The nostalgia hits him the hardest when Carico sees the bright white lines and sled out on the field during training camp. That feeling always reaffirms his goals. Carico said, “each time I step on the field it holds new meaning, whether I’m out here as the facility manager, the coach or grad. It always brings me back and reminds me why I’m doing what I’m doing.”

Whoever said you can’t go back home was wrong, Carico is writing a different story. Each day in Carico’s hometown life is a varying version of perfect. Whether he’s on the sidelines beside his father coaching the next generation of Blue Streaks or walking the grounds on a Monday morning with his pup Arlo, he’s thankful for the opportunities turf has given him. When the sun is shining you can find Carico on his mower. “The mower is my quiet time. If I need to space out for an hour that’s where they can find me, on my Deer, wearing my Pioneer bucket hat with shorts and shoes covered in paint.”

Each time I step on the field it holds new meaning, whether I’m out here as the facility manager, the coach or grad. It always brings me back and reminds me why I’m doing what I’m doing.”

Carico and crew have successfully brought national recognition to their beloved town and fields. The stage he’s setting today will serve as a nostalgic memory for generations of Blue Streaks to come.