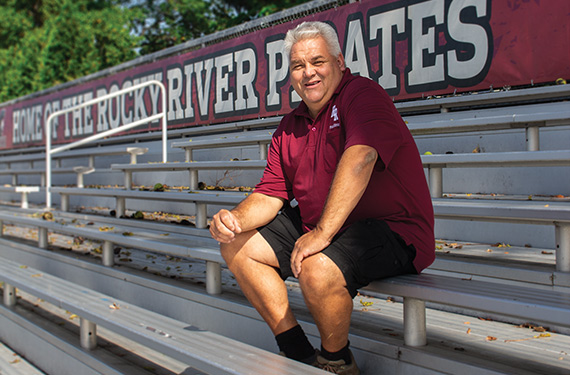 In Rocky River, Ohio – a small town located on the shores of Lake Erie – the culture reflects the community. Frank Avalos, head maintenance repairman at Rocky River School District, has been lucky to be a member of the community for over thirty years and has had an impact on the culture they take pride in. In the center of town sits the stadium where the gates are left open so everyone can enjoy the fruits of Avalos’ labor. Senior photos line the fence of the stadium and you immediately get the sense that each member of the community is invested in the future success of their kids. On Friday nights, the parking lots are filled with family, friends and fans tailgating before the big game. Mother’s wear pins of their athlete or marching band drummer. Father’s reflect on the passes they caught on the field years before. And future aspiring Rocky River Pirates play touch football with their classmates. From the highest point of the stadium, Avalos takes it all in. His bird’s eye view from the press box is where he will watch the marching band file into the stadium, and where he’ll remain until the final seconds of the game.

Thirty-two years prior to my meeting with Avalos, he started working with the district as a bus driver. Once given the opportunity to work on the school grounds, he got a taste for the job and never looked back. With years of learning on the job, Avalos empowered himself to become an expert. Today he leads a crew to ensure each inch of their multiple facilities are properly managed. Each a reflection of the decades of dedication Avalos has for the job.

I met Avalos outside his maintenance shop early one September morning. The district office was bubbling with folks, in and out, checking in with Avalos. His list of to-do’s was lengthy on a whiteboard at the back of the room and, as we headed out to walk the campus grounds, his to-do list came to life. Avalos proudly showed off his baseball, softball, soccer, lacrosse and football practice areas before we reached the center of campus and entered the stadium. Avalos described the community excitement on Friday nights and the commotion the entire town creates on Homecoming night – from tailgating to the parade. We worked our way back to the maintenance shop where buckets of paint and tools lined the walls, ready to be taken out by crew members. 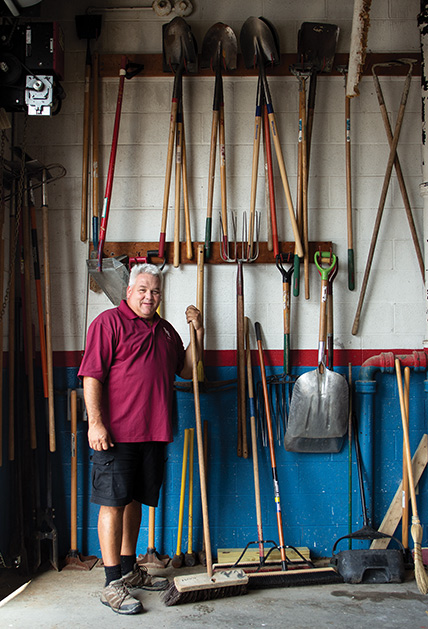 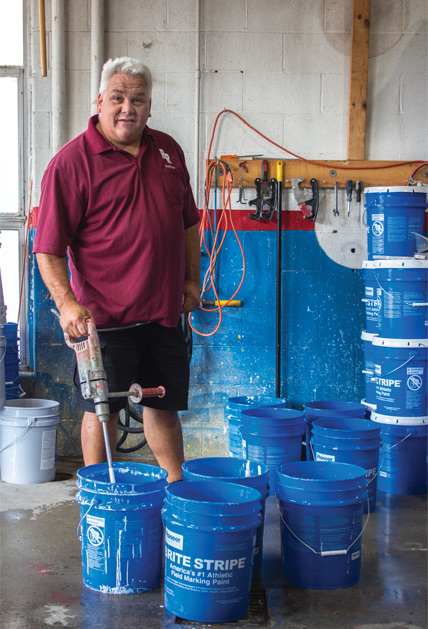 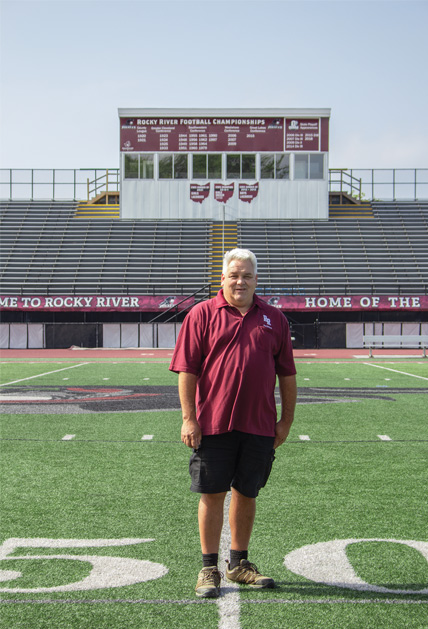 I returned to Rocky River High School stadium a few weeks later to experience the thrill for myself. From across the stadium I could see Avalos’ stature and presence work his way through the crowd, being stopped every couple of feet to talk to someone else. Before kick off, Avalos took his place in the press box and watched the game unfold from his favorite bird’s eye view.

Everything Avalos does week in and week out is all for the student experience. He hopes their perception of their home field and community is something they take pride in. Avalos said, “there’s nothing more rewarding than having the kids appreciate or notice what we’re trying to accomplish here. I know the coaches take pride in it and I hope the kids see that I do this because I want them to take pride in their school and community. This community nurtures their young and rallies around them all year long through school events, and I hope the role I play in that culture makes a difference”.

Sam Gifford, Executive Director of HR and Social Services at RRSD, says Avalos is a rare commodity and tremendous asset to the district. Gifford noted, “Frank’s loyalty and dedication to the district is unwavering. Frank’s legacy for years to come will not only be the condition of our grounds but the student experience he creates. I truly believe the student athletes who play here carry a piece of Frank with them, win or lose, when they leave. He cares so much about the student experience and he often comes to games even when he’s not working. Partly because he loves sports, but also because he enjoys seeing the student athletes excel on the fields he works so hard to maintain”. 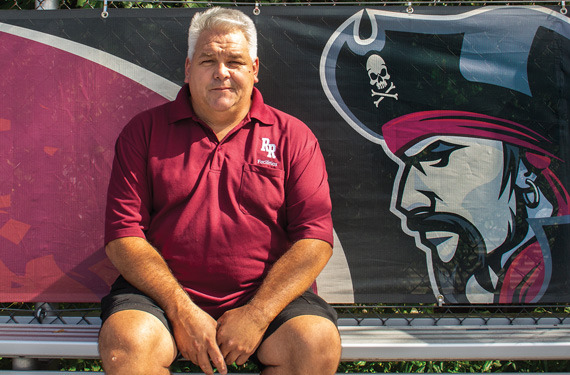 Avalos’ love for sports and his community is on display throughout the campus and district grounds, season after season. Mark Wagner, Director of Athletics and activities at RRSD, is thankful to work with someone like Avalos who is valued for his experience and positive attitude. Wagner says the appreciation doesn’t end with him, as the amount of coaches, athletes and administrators who have been blessed to work alongside Frank is countless. Wagner added, “Frank has helped me tremendously in my job throughout the years and his legacy will be far reaching at Rocky River High School.

He has this sense of purpose that whatever needs to be done, will be done. He is special to our district though because he not only puts in the work here at RRSD but he travels to watch our teams play on the road. His love for Rocky River is recognized and appreciated by our student athletes. Frank is multi-talented and amazing with everything from preparing the fields, painting lines, testing sound equipment and running a professional press box operation during games. Frank is a very strong family man and clearly someone who has a strong presence in their community as well”.

For the past 30-plus years, Avalos has made a home at Rocky River School District. He is in his element when leading his department to create the positive student experience he wants to provide for his community. Each student, coach, and community member who gets to witness the “Avalos experience”, returns week after week, year after year to be a part of the thrill of Friday night. Avalos took pride in describing all the elements that make up the culture of a Rocky River sporting event. The band, the tailgating, the fans, but at the core of each and every event for the past 32 years sits Frank Avalos.