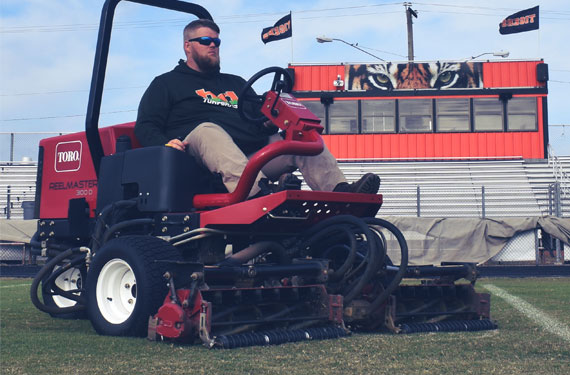 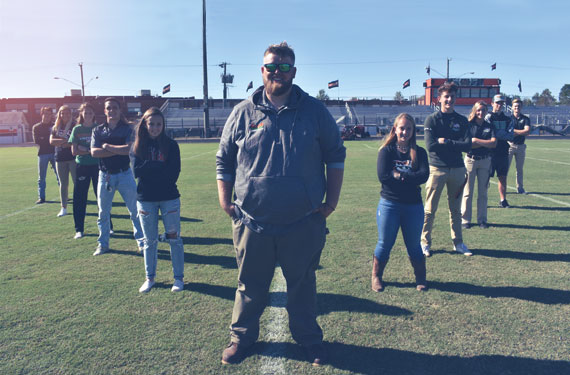 He takes the field each day, along with 200 high school students. Not only is he responsible for game day ready fields, he has to motivate a class of teenagers to perform the tasks. “I often tell parents; grass is more obedient than your children,” said Miller. Miller took over the program two years ago after showing up for a meeting that quickly turned into an interview.

Most of the jobs Miller has been given up to this point were a result of somebody taking a chance on him. Miller started his career working under Matt Brown for the New York Mets and then later followed Brown to work at Heinz Field in Pittsburgh. Brown and Miller met at the STMA Denver conference. Brown offered him a gig before he graduated, taking a chance on the industry newbie. Fast forward a couple years and Miller is sitting across from the principal of Prince William County Schools, begging her to take mercy on him.

Miller recalled, “I went into a meeting with the career services director, planning to ask some questions about their horticulture program, because I was honestly just curious. Then he starts coming at me with questions on how I would run the program and how I would teach these kids about turf maintenance. Next thing I know he’s telling me to go over to the high school to interview with the principal for the job. I was freaking out. I was in shorts and a polo, my hair was down my neck and I was wildly unprepared. I wasn’t even applying for the job!” Luckily, Brentsville’s principal took a chance on the disheveled Miller and offered him a job he couldn’t refuse. “I was planning to head back to Pittsburgh after graduation and continue working with the Pirates and the Steelers. I never planned on leaving stadium work so quickly. But everything fell into place so perfectly, I didn’t have the chance to say no,” said Miller.

Now it was Miller’s turn to take a chance. He had to make the choice to leave behind sports turf management and create a new future entirely. When Miller showed up for his first day of work the program had three mowers, two being manual reel mowers. At just 21 years old, Miller had no idea how he would take the previous horticulture program and turn it into a turf program that grabbed the attention of students with just three mowers.

I named the class ‘Brentsville Turf Program’, which is a lot sexier than horticultural, I think.” Kids started to ask, “what are you going to teach me about grass?!”

Along with obtaining enough equipment to teach, Miller had to overcome several challenges during the infancy of the program. This included creating a curriculum that would stay within the competencies mandated by the state, while making sure the field was ready each Friday night. However, the biggest challenge for Miller was exposure. Students weren’t writing about becoming sports turf managers in their career essays. Those opportunities didn’t even register on their radars. Miller started by rebranding the program in hopes to catch their attention. “I named the class ‘Brentsville Turf Program’, which is a lot sexier than horticultural, I think.” Kids started to ask, “what are you going to teach me about grass?!” And the exposure kept building. When Miller first took over the program there were barely enough students to reach full capacity for one class, about 80 kids in total. Going into their third year the turf program has over 200 students, 70 of them being transfer students who are solely interested in Brentsville because of Miller’s program. They’ve had to add another teacher and all their classes are at full capacity.

Now the Brentsville Turf Program is a household dream for students in the county, and that’s a credit to Miller’s efforts to ingrain the program into the community. They continue to gain exposure through events like Brentsville Homecoming, where the students create their own designs to be painted around the county for homecoming games. Miller and the students are also called on to help with community parks, building mounds, dragging fields and the occasional yard clean-up for veterans in the area. Additionally, Miller has successfully brought exposure to the industry as a whole. Ten of his students chose to pursue sports turf after graduation last year, and he suspects at least 20 this year will graduate with intentions to the join the industry.

After successfully recruiting students with whom to share his passion, Miller set out to make a real impact in their lives, on and off the turf. Miller stated, “With this program, I strive to make a difference in these kids’ lives, whether it’s turf related or not. I want this program to inspire them to make the right decision in the classroom, on the field and out in the real world.” Miller’s students are not only being recognized for their exceptional turf work but they are performing better in the classroom as well. Miller beamed, “this program impacts the rest of their day. For a class period they can escape high school. It’s fun and it’s something they can be proud of. This program is their motivator to succeed in other aspects of their life.” 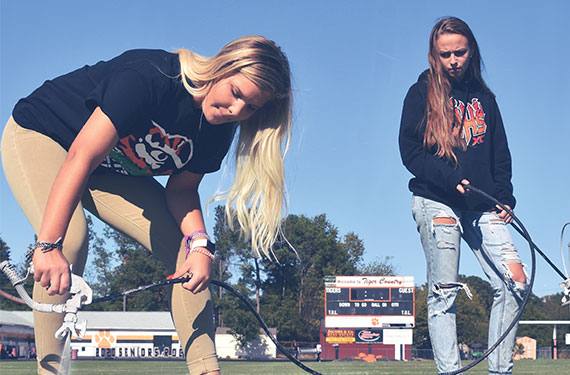 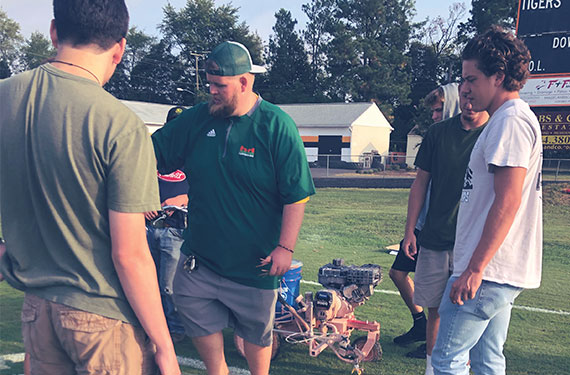 Miller is giving students the vehicles they need to be successful, literally. Miller said, “This program works because you take high school students who are rarely trusted in their other environments and you let them take a mower out or give them a paint striper. You are giving them the confidence that they can succeed when someone is depending on them to get the job done.” Julie Kessler, a senior in the program who is planning on attending Virginia Tech for Turf, appreciates that Miller treats her as an equal on the field. Kessler says, “Mr. Miller has changed the game, he doesn’t treat us like children. Instead, he makes it clear that we are all a team, we must work together as equals to get the job done.” Miller empowers his students to see the possibilities for their future. Even if they don’t choose a career in turf, they will have the best lawns in the neighborhood.

For the students who have been inspired to pursue careers in turf, Miller is preparing them for tomorrow. The Brentsville Turf Program is treated like a professional grounds crew, the classroom serving as the workplace and the field serving as their stadium. The students work on everything from filling divots, painting the field, designing logos, mowing, landscape maintenance and game day set up. Miller said, “I hold the students to a very high standard. It’s important for them to understand the industry and what will be expected of them. By setting those standards now they will be better prepared for entering the field. They will have a real leg up on their competition too!” For this reason, Miller harps on the importance of using commercial grade or industry used equipment because he wants the students to be able to leave his classroom and walk right onto a professional crew and be able to hold their own. A senior at Brentsville, Stephen Detwiler, credits Miller with preparing him for a future in turf. “Mr. Miller ensures that we’re set up for the future. He is making important calls to build connections on our behalf and preparing us on the field to continue on to the next level.”

This program works because you take high school students who are rarely trusted in their other environments and you let them take a mower out or give them a paint striper. You are giving them the confidence that they can succeed when someone is depending on them to get the job done.”

In order for the students to receive an ‟A”, their work must reflect what you’d see at Heinz Field or any other ballpark around the globe. Most importantly though, the students are graded on their ability to create a safe and healthy playing field for their peers. Multiple times last season the Tigers received two inches of rain right before game time. Any groundskeeper can relate to the dread Miller must have felt. However, Miller saw the rain as another teaching opportunity for the students to overcome the stress of game time and still create a product that was safe. Then turn around and repair the field to be ready for the following week. Friday night football fans and Miller are not the only ones admiring the hard work of this student led grounds crew. The Brentsville Turf Program has been honored with Pioneer’s Field of Excellence Award, STMA’s Stars and Stripes and Sports Turf Manager’s National Football Field of the Year.

Miller took a chance on leaving behind his aspirations to work on a professional grounds crew to come home and spearhead a new turf program in Prince William county. What he found was more passion for the industry than he ever expected. “I see myself working with these students for a long time. I only want to keep going up from here.” It didn’t take long for Miller to realize he made the right choice. Miller acknowledges that these students are impacting his world as much as the program is impacting theirs. “When I first met this student, he talked about dropping out. He was falling behind and most likely wouldn’t graduate on time. I convinced him to come back in the fall and give the program a shot. That fall we took a trip to Virginia Tech to tour their facility and hear more about the crop soil and sciences program (a program Miller was a graduate of). On the bus ride home, that student came over to me and said, ‘I want to go there.’ That really hit me, here is this kid who was about to drop out of high school and now he has these goals because of turf. That student worked extremely hard to graduate on time and he will soon be transferring to Virginia Tech to pursue sports turf management.”

So, what does the future hold for the Brentsville Turf program? With Miller utilizing his connections in the industry the program will further their partnerships with Virginia Tech and Penn State. The students will be leading trials that will be utilized by the college programs. Miller says, “we have the unique advantage of being located in the transition zone, so Tech and Penn State can benefit from our research. We will be trialing the new Tahoma 31 this upcoming season and have hopes to work with companies as well.”

… On the bus ride home, that student came over to me and said, ‘I want to go there.’ That really hit me, here is this kid who was about to drop out of high school and now he has these goals because of turf.”

Miller has aspirations to create the first turf grass research center at a high school in the country. The goal would be to have the kids working directly with professionals in the industry and in academia. The center would include a lab where the students could conduct research projects and trials, a maintenance shop where students would learn how to maintain and repair equipment and a par three course so they can learn the other half of the industry.

As an industry we should expect great things from Miller but even more from the students who have the great opportunity to learn from him.